A Monk Zombie with powerful attack.

Swordsman Zombie (大刀武僧僵尸; pinyin: dàdāo wǔsēng jiāngshī) is a zombie in the Chinese version of Plants vs. Zombies 2. It is first encountered in Kongfu World - Day 15. It can cut plants with the sword it wields, killing most plants in two hits. It can be considered to be a weaker version of Gargantuar, as it can cut through the player's defenses if not killed quickly.

It is important to rid of it as soon as possible. Laying down a few Spikeweeds or Spikerocks can deal with Swordsman Zombies in groups, especially considering that they cannot damage grounded plants. For even better results, stalling plants such as Stunion are an effective choice. 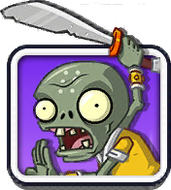 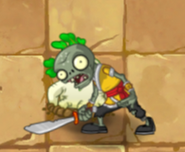 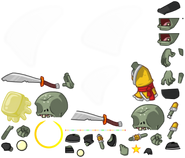 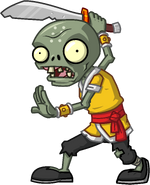 A hypnotized Swordsman Zombie
Add a photo to this gallery

Retrieved from "https://plantsvszombies.fandom.com/wiki/Swordsman_Zombie?oldid=2289145"
Community content is available under CC-BY-SA unless otherwise noted.