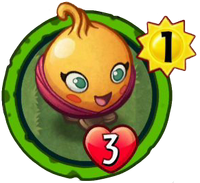 For the version in Plants vs. Zombies 2, see Sweet Potato.

When played: Move a Zombie to this lane.
Loves unicorns and rainbows... and watching cats on the Internet.

Sweet Potato is a premium uncommon plant card in Plants vs. Zombies Heroes and a member of the

. She has the Team-Up trait, and her ability moves a selected zombie onto her lane when she is played, unless her lane is already occupied by a zombie.

She is based on the plant in Plants vs. Zombies 2 with the same name and similar appearance. However, unlike her appearance in Plants vs. Zombies 2, Sweet Potato has visible teeth, which can be seen when activating her ability, attacking, and destroyed. She does not degrade when damaged in this game. The cat is a reference to the Neon Cat meme, a cat drawing a trail of rainbow.

Loves unicorns and rainbows... and watching cats on the Internet.

Sweet Potato can be used to protect other plants, as she can withstand most attacks early on, and continue to absorb at least one hit the longer a game draws out. Sweet Potato's real value, however, lies in her ability to draw a zombie to her lane, allowing the player to either remove Amphibious zombies from the aquatic lane and expose them to attack, move Arm Wrestler to prevent him from getting boosted, or clear a lane for

Anti-Hero or high-strength plants to hit your opponent directly. For Mega-Grow heroes with no Amphibious plants, such as Chompzilla and Captain Combustible, she can be a helpful tool for dealing with Amphibious threats.

Green Shadow can use Sweet Potato in tandem with Precision Blast, as the ability to lure a zombie into the middle lane will allow her to attack that zombie for 5 damage, or vice versa, all the while at a minimal sun cost. Grass Knuckles can increase her survivability with health-boosting cards such as Steel Magnolia, and can also give her a small boost when she played if he has Starch-Lord on the field.

Using tricks is the player's best bet to disposing of her quickly. Because of her ability, a zombie will most likely be unable to destroy her in a timely manner. If the opponent has used this on a high health zombie and there are no attacking plants there, then Sweet Potato should be destroyed easily. Another way to prevent this is to fill all lanes with zombies. Electrobolt can destroy her instantly, provided her health is not boosted. Tricks such as Smoke Bomb and Carried Away can also move the zombie back to their original position.

Retrieved from "https://plantsvszombies.fandom.com/wiki/Sweet_Potato_(PvZH)?oldid=2225286"
Community content is available under CC-BY-SA unless otherwise noted.