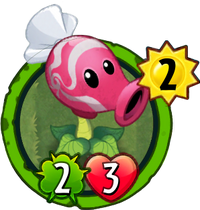 For the version in Plants vs. Zombies Adventures, see Sweet Pea.

When played: Move a Zombie to this lane.
Zombies may only have four teeth left, but one of them's a sweet tooth.

Sweet Pea is a galactic uncommon plant card in Plants vs. Zombies Heroes and a member of the

. It does not have any traits, and its ability moves a selected zombie onto its lane when it is played.

It is based on the plant in Plants vs. Zombies Adventures with the same name and similar appearance.

Its description references the term "sweet tooth," a liking or "weakness" for sweet foods. It is also a reference to its ability to move zombies onto its lane.

Zombies may only have four teeth left, but one of them's a sweet tooth.

more and lacks the Team-Up trait. However, its 2 strength means it can fight on its own, and unlike Sweet Potato, you can benefit this using Torchwood or The Podfather to increase its strength and do a lot more damage.

Just like Sweet Potato, you can move troublesome Amphibious zombies on the aquatic lane out to its lane to destroy them easily, making Sweet Pea useful for Chompzilla and Captain Combustible who both lack Amphibious plants. It is also a great counter to Arm Wrestler, even greater than Sweet Potato, since it can single-handedly take it down.

Since Sweet Pea can move a zombie into the lane it is on, it can end up destroying most of your weaker zombies like Fishy Imp and Arm Wrestler. In addition, unlike Sweet Potato, it can benefit in pea decks where Torchwood can cause a problem there. But if Sweet Pea is played on that turn and is not boosted, Rolling Stone or Weed Spray can destroy it. If it does get boosted, Rocket Science can destroy it. 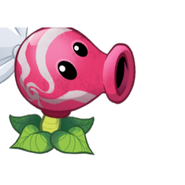 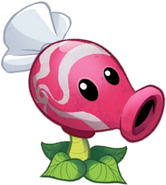 Sweet Pea with the

Sweet Pea with the

Gigantic Sweet Pea due to a glitch 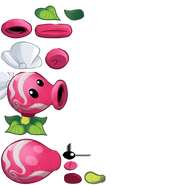 Retrieved from "https://plantsvszombies.fandom.com/wiki/Sweet_Pea_(PvZH)?oldid=2299214"
Community content is available under CC-BY-SA unless otherwise noted.