For the version in Plants vs. Zombies Heroes, see Sweet Pea (PvZH).

Shoots candy at the zombies

Sweet Pea was a VIP in Plants vs. Zombies Adventures. It was one of two VIP variants of the Peashooter (the other being Beeshooter). It was unique from other VIP plants in the fact that the player had to unlock it by asking 5 friends to help them. They could also pay 300 gems to obtain it instead.

Its appearance is based on Peashooter as well as a piece of mint candy wrapped in a cellophane wrapper. It also shoots a piece of mint candy. Its name is a reference to the sweet pea (Lathyrus odoratus), a flowering plant in the genus Lathyrus in the legume family Fabaceae that is native to Sicily, southern Italy, and the Aegean Islands.  The "sweet" part of its name also references the plant's candy appearance.

“I always cry at germinations,” says Sweet Pea, an unabashed romantic--sentimental but never saccharine, and always low-calorie. But watch out: Sweet Pea is a lover AND a fighter.

Sweet Pea is a great plant to always use after it is unlocked. Being free to plant in Road Trip levels and the only VIP which can be grown without spending gems, it makes it a good substitute of Peashooter early on, as well as a good emergency plant later on. However, the damage and range are not that much better than Peashooter, but it is still slightly stronger, but it will have trouble defeating Conehead Zombies without help.

While Sweet Pea cannot defeat Conehead Zombies reliably, it still can kill basic zombies reliably, giving it some use after Sweaty Palms onward, and if no other VIPs are unlocked, it is always safe to use this plant in case of emergencies. In fact, it has some use even in The Sand Dooms or other levels without regular Zombies. They take up the VIP slot, and can at the very least be front-line cannon fodder. In Zombitorium Manor, it can come in handy to deal with any Imps thrown by a Gargantuar Zombie. It would take 6 seconds to kill an Imp by itself. 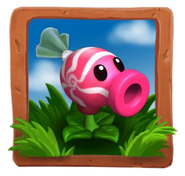 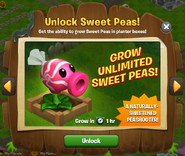 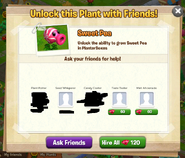 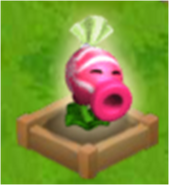 A Sweet Pea getting revived