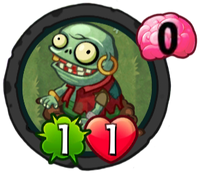 For the Plants vs. Zombies 2 version, see Imp Pirate Zombie.
Not to be confused with Imp (PvZH).

None
When he's not fighting Plants, you'll find him swabbing the Zombot Plank Walker's poop deck.
Swabbie is a colossal uncommon zombie card in Plants vs. Zombies Heroes and a member of the

. He has the Amphibious trait and does not have any abilities. His closest plant counterpart is Puff-Shroom.

He is based on the Imp Pirate Zombie from Plants vs. Zombies 2.

His name is based on the real meaning of swabbie, a slang for a low ranked member of the navy.

Swabbie is, in most cases, only useful as a shield to absorb incoming fire for you, as his basic stats do not allow him to survive very long or deal significant damage to plants or your opponent. However, he can be boosted for extra stats with the help of Maniacal Laugh and the like.

A pirate-themed deck using Imp-Throwing Gargantuar or Zombot Plank Walker, to make a Swabbie or in the case of the latter, making more pirate zombies, and Swashbuckler Zombie, benefits Swabbie and other pirate zombies from Swashbuckler Zombie, who raises their stats when they hurt your opponent. However, Swabbie will only get to serve as a minor annoyance due to his low stats.

An Imp-themed one with Toxic Waste Imp, giving the

Deadly trait to all Imp zombies, and Imp Commander to draw an extra card when an Imp hurts your opponent can also take great advantage of Swabbie, although just like a pirate deck, there are better Imps to use than him. Still, Swabbie can serve as a free instant-kill, assuming he gets to hurt a plant.

As Huge-Gigantacus or Super Brainz, you can take advantage of his cost by playing him in Medulla Nebula, gaining +2

that turn. This allows you to play expensive tricks such as Bad Moon Rising or let Zom-Blob gain more strength if you play it that turn, preferably on a Swabbie in a Medulla Nebula or just on the aquatic lane on turn 7.

Swabbie is also good for the Evolution of many cards, simply because it is free and allows them to be played on the aquatic lane. While other cards are able to substitute it, there is one zombie that especially appreciates a Swabbie on the field: Unthawed Viking, since Swabbie is the only Amphibious pirate that is worth using for Evolution (as the other two Amphibious pirates, Zombot Plank Walker and Zombot Aerostatic Gondola, are too expensive to be good for Evolution).

Anything that can attack can destroy this zombie. Use minimal powered plants or tricks, and Bounce this zombie if he gets powered up too much.

Try to not waste useful cards like Wild Berry and Sizzle on it unless it is boosted, as they can be saved for stronger zombies later on. Sour Grapes is a good plant against this zombie as it can destroy him and hurt other zombies too, thus not counting as a waste.

Retrieved from "https://plantsvszombies.fandom.com/wiki/Swabbie?oldid=2302024"
Community content is available under CC-BY-SA unless otherwise noted.