He learnt his cooking skills at Mount Brainji Restaurant. The sushi he makes are popular among the zombies.

Even though Sushi Chef Zombie's sushi cannot fulfill the hunger of brains of zombies, it is still very attractive to them.

Sushi Chef Zombie is the second unique zombie encountered in Heian Age in the Chinese version of Plants vs. Zombies 2. He occasionally throws sushi onto random unoccupied tiles. All zombies within two tiles away from the sushi will run towards it. Orchid Chef can make zombies indifferent to this effect.

The first zombie who steps on sushi will receive a speed boost, similar to orange potions in Dark Alchemy. The sushi will never go away until zombies consume them, and they also cannot boost other Sushi Chef Zombies.

Sushi Chef Zombie has the same body posture as Octo Zombie has. He wears a blue headband and blue kimono, along with a light blue belt with a tissue tied to it. He also wears a pair of sandals with blue plastic ropes and brown heels.

The sushi that he holds seems that it is likely a salmon sushi, as we can see more clearly that the meat has white lining across it. The sushi will release white smoke when it lands, indicating that it is still hot.

Sushi Chef Zombie isn't that tough to deal with, but the difficulty will be increased if there are multiple Sushi Chef Zombies. Using Primal Peashooter is a good choice to push back the zombies if they are boosted by the sushi. Combining it with ice-based plants like Snow Pea will be a very great defense to deal with boosted zombies.

Orchid Chef is a great opportunity to move any zombies in different directions, avoiding nearby sushi, and make them indifferent to sushi's attractive smell. But if there is a sushi right in front of the zombies, use certain defensive plants, like Wall-nut, to prevent them from eating it. 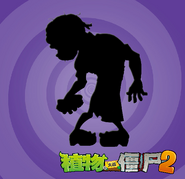 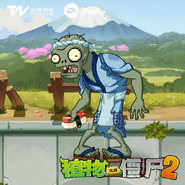 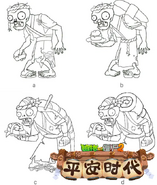 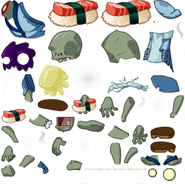 Retrieved from "https://plantsvszombies.fandom.com/wiki/Sushi_Chef_Zombie?oldid=2373698"
Community content is available under CC-BY-SA unless otherwise noted.