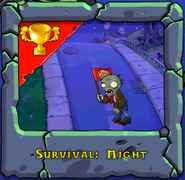 Then, plant two Gloom-shrooms and two Garlic (two if Pole Vaulting Zombies appear) in the second and fourth lanes. Plant some defensive plants the other three lanes. You can plant Tall-nuts, Spikeweeds, and Spikerocks to increase your defense. Pumpkins and Magnet-shrooms are unneeded. 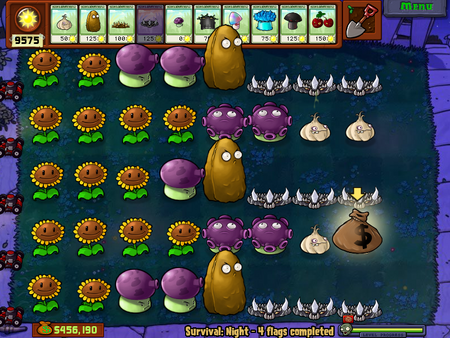 Note: The money bag is on top of a Garlic.

Remember to bring the Grave Buster to remove graves. You will start with five graves. An extra grave will always pop out on one patch on the lawn. They pop out whenever a huge wave starts, so ambush zombies will always appear. If the lawn is full of plants, one plant will be removed and the grave will still pop out.

Have you ever learned that Scaredy-shrooms are useful? I have. Want a bet? Do this Survival Mode level. If you have ten slots, you are using every nocturnal plant which is not aquatic. Plant:

Don't use any Gold Magnets. Focus on Sun-shrooms (two columns) and Puff-shrooms first. Plant Scaredy-shrooms in the third column for Conehead Zombies. Use Grave Busters and replace Puff-shrooms with Fume-shrooms. Here are three planting diagrams:

Third diagram (do this in the second flag if not completed):

Don't replace the Puff-shrooms with Fume-shrooms in the fifth column.

Create the third diagram above. But choose these:

After the third diagram, you will now know about the fifth column. Replace the Puff-shrooms with Magnet-shrooms, kill Football Zombies, and upgrade the front Fume-shrooms to Gloom-shrooms but not the Fume-shrooms in the fourth column. Just do this and use the optional plants if needed. The diagram should look like this:

The last two Fume-shrooms at the front should be replaced by Gloom-shrooms.

If a Backup Dancer eats a Gloom-shroom, just plant another Fume-shroom and upgrade it. Use Pumpkins on Gloom-shrooms and do this in the final step if incomplete.

Put Pumpkins on Magnets due to the Pole Vaulting Zombies.

Note: Squash, Potato Mine and Puff-shroom are needed in this process.

In flag two, plant Spikeweeds in the front most three columns. Also, replace all of the Sun-shrooms with Starfruits.

Plants Needed (The upgrades for 9 and 10 seed slots are not needed):

This strategy is compatible with Night levels in Adventure Mode and Survival: Night 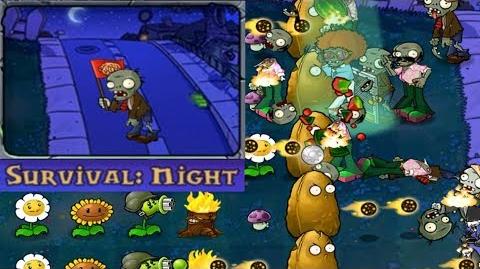 Retrieved from "https://plantsvszombies.fandom.com/wiki/Survival:_Night?oldid=2356033"
Community content is available under CC-BY-SA unless otherwise noted.