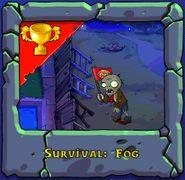 Nothing much different from the average fog level setups. Plant Sun-shrooms, Puff-shrooms, and possibly Sea-shrooms and Imitater Sea-shrooms. Slowly replace the Puff-shrooms with plants like Fume-shrooms, but you can keep some Puff-shrooms as delayers. You plant Planterns, protect them and whatnot. You can try placing the Gloom-shrooms on the first flag, but it is preferred to do it on the second.

Place Gloom-shrooms on the pool. The total cost of a pumpkined pool Gloom-shroom is 375 sun. Then, not much else. You may add some Magnet-shrooms. You should also add any plants needed to counter some zombies, like Cattails or Blovers against Balloon Zombies, Umbrella Leaves against Catapult Zombies, land Gloom-shrooms close to the left against Digger Zombies, etc.

Made by EMPeachy Flag one: Here's what you will want to take:

Start out by placing Sun-shrooms on land in columns one and two. Do the same with Puff-shrooms and Sea-shrooms in column four. Do NOT plant on column three and do NOT place Puff-shrooms on Lily Pads. It is a waste.

After you kill the first zombie, start adding another column of Puff-shrooms and Sea-shrooms in column five. This is also the time to start planting your Sun-shrooms in Pool columns one and two, and NOW plant Scaredy-shrooms on land in column three. Also add two more Sea-shrooms in this column. Your next job is to plant Planterns in rows one and six, column six (you could do this slightly earlier). Plant Wall-nuts in front of them and also in front of the Sea-shrooms, as they are vital to this setup. Finally, replace the Puff-shrooms with Fume-shrooms and replace the Sea-shrooms on column three with Scaredy-shrooms, then you are complete for the first flag! If something is going bad, use a Squash or another instant kill. Your lawn should look like this:

NOTE: If a letter is underlined, that means the plant is on a Lily Pad.

Flag two: These are your plants:

This flag is all about replacing. Right away, your Tall-nuts should be ready to be planted, so plant them on rows two and four to column six. Your Cattail should be ready to go too, so dig up one of the Sea-shrooms on column four, plant a Lily Pad, and then a Cattail. You should be able to have planted two Cattails before the huge wave, and if you are lucky you could have three. But remember to upgrade the Lily Pads on column four before the ones on column five, so they do not get eaten as quickly. You also need to remember to replace your existing Wall-nuts with Tall-nuts and Imitaters. The last thing to do is to replace the Scaredy-shrooms with Snow Peas. A word of warning though: sun is very tight.

Flag three: Your Poison is...

Upgrade the last two Lily Pads ASAP. You also need to replace your Fume-shrooms with Repeaters to deal with the Dancing Zombies! On the final wave, a Digger Zombie will come. Use a Cherry Bomb or Jalapeno as soon as you see it. Your lawn should look like this:

Plant Sun-shrooms on the back three lanes (not on pool) as fast as possible. Plant Planterns on lane two and five in column six protected by a Pumpkin. Potato Mines are needed in this process. Now, dig up the entire back column of Sun-shrooms. Then, replace it with Repeaters. In both pool lanes at columns six, seven, eight, and nine, place Gloom-shrooms with Pumpkins. Also place two Gloom-shrooms behind all Planterns.

Anything not done will be done in flag four and five.

Sun-shrooms and Puff-shrooms are going to go in the places they were in the Survival Night mode. Scaredy-shrooms also do the same. Fume-shrooms still replace the Puff-shrooms. But Sea-shrooms should go in the Pool (not Puff-shrooms on Lily Pads) and Blover should be used often. Still the fifth column should not have Fume-shrooms. I had quite a poor job done because my diagram was like this:

You could have done better than I did by planting more Fume-shrooms. I didn't want to have to do this but I am not using Blovers until I finish planting Fume-shrooms. You don't have to do the same if you have planted a good amount of Fume-shrooms. Fifth column is once again for Magnets. Diagram for mine (and what you should have now) is here:

Well, we are now at where we should be so plant:

Plant the last two Magnets on Lily Pads in the pool and put Pumpkins around the Sun-shrooms in the first column, just in case Digger Zombies come. Keep the work with the Glooms up. The lawn should look like this:

Plant Pumpkins around Glooms and Magnets. Sun-shrooms are okay. We already finished them. Plant new Magnets, Fumes and Glooms if they are eaten.

Choose these plants for the final step:

Catapults are here. Try kill them with the instants and protect the Magnets with Pumpkins from Pole Vaulting Zombies.

Fume strategy (there are only Spikeweeds in the fog)

A Survival Fog final and a plan to beat it

no zombie will ever get through ( except for Dr. ZomBoss )
Add a photo to this gallery 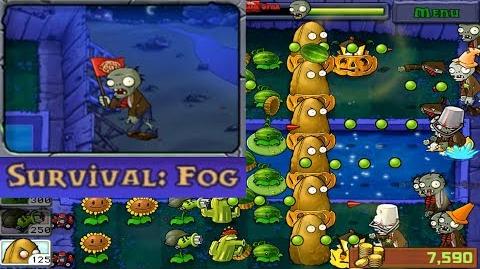 Many Melon-pults
Add a photo to this gallery

Retrieved from "https://plantsvszombies.fandom.com/wiki/Survival:_Fog?oldid=2343967"
Community content is available under CC-BY-SA unless otherwise noted.