Plants vs. Zombies Wiki
Register
Don't have an account?
Sign In
Advertisement
in: Pool, Pool levels, Levels,
and 7 more

Survival: Endless is a Survival Mode level that is set in the Pool which has an unlimited number of flags. It is featured in almost every version of Plants vs. Zombies, along with Plants vs. Zombies: Journey to the West and Plants vs. Zombies: Great Wall Edition (although it is not set in the pool in that version). It is unlocked after completing all the other Survival Mode levels. This level is mainly a challenge of surviving as many flags as the player can, and will become very difficult as the player completes more flags. Just like all Survival: Hard levels and Last Stand Endless, the player can choose new plants when two flags are completed. Each time the player upgrades a plant, the upgrade's sun cost increases by 50 sun. If an upgraded plant is removed in any way, its cost will decrease by 50 sun. 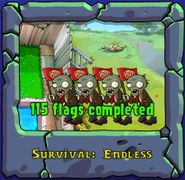 The basic idea of Survival: Endless is that seemingly an unlimited number of zombies are attacking in an onslaught to take over the Player's House. The player has to hold off the zombie hordes for as long as possible, resembling the military act of laying siege to a castle. The only ways for Survival: Endless to end are by getting the player's brains eaten or if they reset.

At 107,374,183 flags, only Flag Zombies will come, and no zombies will be shown in the seed selection screen, until flag 214,748,364. After that, other zombies will come, although in small quantities, and will increase every flag. After 214,748,366 flags, the game will go to -214,748,363 flags (due to an integer overflow), and the flag number will only show during the intermission every two flags. At -107,374,181, only Flag Zombies will show up, until -1 flags, where Survival: Endless will be like normal. This behavior cannot be observed if Survival: Endless is played in the Pool or Fog stage, as the game will crash after reaching flag 107,374,184 and loading the seed selection screen. As Survival: Endless is played in the Pool stage by default, it is therefore technically impossible to observe these errors without hacking the game.