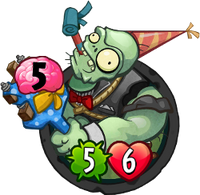 When revealed: Move this Zombie.
Surprise! It's a brains-eating monster at your party!
Surprise Gargantuar is a premium rare zombie card in Plants vs. Zombies Heroes and a member of the

. He has the Gravestone trait, and his ability moves him onto a selected lane when he is revealed, if possible.

Surprise! It's a brains-eating monster at your party!

Like all Gargantuars, Surprise Gargantuar is a very powerful zombie and has average stats for his cost. But the value comes with his ability to switch lanes. He can be moved so the opponent cannot easily predict the zombie hero's play, allowing him to deliver high damage with relative safety.

Sneaky heroes can give him a small initial boost with Headstone Carver thanks to his Gravestone trait. Or, they can use Mixed-Up Gravedigger or Cursed Gargolith to reactivate Surprise Gargantuar's ability and refresh his health every turn, though this restricts their play options on Surprise Gargantuar.

Neptuna has plenty of synergy cards to use with Surprise Gargantuar. The first example are

Frenzy cards like Possessed and Going Viral, allowing him to plow through weak plants and then hit her opponent. The second is In-Crypted, which has the same effect as Cursed Gargolith, only much cheaper and one-time only. And finally, she has access to Gargologist, who reduces the cost of Surprise Gargantuar by 2 and can allow him to be played on turn 3. Brain Freeze and Impfinity have

Frenzy cards and In-Crypted respectively too, but these are basically their only options. Super Brainz and Huge-Gigantacus, however, can use a different strategy with Wizard Gargantuar, guaranteeing at least 5 unblockable damage assuming Surprise Gargantuar moves onto an empty lane. They can also use bonus attacks to take out annoying plants.

Just like any Gravestone zombie, the best way to counter this zombie is to play Grave Buster, Spyris, Cool Bean with Winter Squash, or Blockbuster. A

Smarty hero can use Grave Mistake instead to Bounce him. Either way, it may be a good idea to fill the lanes with plants if your opponent tries to target you, or use Team-Up plants to protect any powerful plants that your opponent may target instead.