For the version in Plants vs. Zombies 2, see Surfer Zombie.

None
He used to hang 10 with the best of them, but ever since he lost that toe to a shark he hasn't been able to hang more than 9.
Surfer Zombie is a galactic uncommon zombie card in Plants vs. Zombies Heroes and a member of the

. He has the Amphibious and

Frenzy traits and does not have any abilities.

He used to hang 10 with the best of them, but ever since he lost that toe to a shark he hasn't been able to hang more than 9.

This zombie is relatively glassy for his cost. However, due to his Amphibious trait, he can be used to attack the aquatic lane, especially if the plant hero has yet to or is unable to set up their aquatic defenses. Even if they have Amphibious plants, Surfer Zombie can destroy them due to his high stats.

The biggest weakness of Surfer Zombie is his high cost and inflexibility. Unless you're running sports deck with Team Mascot and Zombie Coach, Snorkel Zombie is way better than Surfer Zombie to deal damage due to its better stat-to-cost ratio.

Although he hits hard stat-wise, he can be easily destroyed by a plant that does at least 3 damage or a simple Berry Blast unless he is shielded or has had his health boosted. If that happens, use instant-kill cards such as Transmogrify, Shamrocket, or Squash. 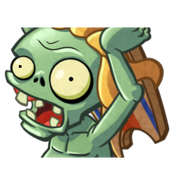 Surfer Zombie with a star icon on his strength