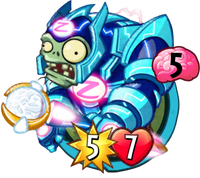 When a Gargantuar destroys a Plant, destroy all copies of that Plant.
This one's got a real temper on him. When he decides to take out a Plant...it's brutal. Just brutal.
Supernova Gargantuar is a galactic legendary zombie card in Plants vs. Zombies Heroes and a member of the

Frenzy trait, and his ability destroys all copies of a plant when any Gargantuar, including him, destroys it. This ability persists until all Supernova Gargantuars are removed from the field.

He is based on a Gargantuar, and a supernova, an astronomical event that occurs when a star reaches the end of its lifespan and, consequently, explodes.

His name is a combination of "supernova," and "Gargantuar," the type of zombie he is.

His ability most likely represents a star's explosion, which wipes out everything in the area.

This one's got a real temper on him. When he decides to take out a Plant...it's brutal. Just brutal.

Supernova Gargantuar has great stats for a 5

zombie, being big enough to take most hits, and strong enough to

Frenzy past most non-defensive plants. This can be an alternative to Smashing Gargantuar if you don't need to rely on all Gargantuars having the

Frenzy trait, and for an aid of +2

more than Smashing Gargantuar. Being a science zombie, Immorticia can use him to great extent in a science deck, especially with Gadget Scientist, Zombot Drone Engineer and Interdimensional Zombie, although Interdimensional Zombie will not fit well due to his low stats and Supernova Gargantuar's expensive price. Alternatively, she can combine him with Wizard Gargantuar to break through her opponent's defenses and do unblockable damage to them.

Bullseye trait he can have, Cosmic Scientist can Conjure him and give him

Bullseye without the aid of Wizard Gargantuar, but keep in mind that Cosmic Scientist is luck-based. Immorticia can also use Lurch for Lunch or Electrician with this if there are Pineclones on the field, which can wipe the field clean before combat, possibly leaving a

Kabloom hero defenseless and at a major loss of cards.

Supernova Gargantuar is most useful against decks that use 3-4 copies of the same plant, and against themed decks that revolve around a single type of plant. The most notable examples of this are rush decks using Pineclones to boost weaker plants or decks involving Snake Grass. Because of this, he has no worries on activating his ability, due to his incredible 7

. He can even survive if there are two Pineclones in his lane. His ability can also be used to eliminate plants in Pair Pearadise or to sweep up Puff-Shrooms made by Mushroom Grotto. However, your opponent may have Molekale or tricks like Squash, Spring Bean, or Shamrocket to either reduce the effectiveness of Supernova Gargantuar or remove him from the field, preventing his ability from activating.

To get the greatest effect out of his ability, a Gargantuar deck is optimal. Play another Gargantuar on the leftmost instant of said plant while Supernova Gargantuar is on the rightmost ground lane to clear out other lanes before combat there as long as that Gargantuar can destroy that plant.

Note that even though Supernova Gargantuar destroys plants with his ability, his ability will not activate the

Frenzy trait, meaning that he only does one bonus attack and not multiple if he destroys all copies of a plant.

He can also be played for 3

if there is a Gargologist on the field, allowing him to be a threat to your opponent early in the game. However, only The Smash can do this normally.

Gargantuar tricks that destroy or damage plants, such as Slammin' Smackdown and Zombot's Wrath, can be used to activate this zombie's ability, but this can only be normally done as The Smash and Electric Boogaloo, respectively. The other Gargantuar tricks, Zombot Stomp and Triplication, are useless since all they do is Bounce all plants on ground lanes instead of destroying them, and Conjure three cards respectively.

This can also be used in conjunction with King of the Grill, as this can destroy multiple copies of the same card in one hit, therefore allowing you to Conjure many cards as well. Ancient Vimpire can also boost this heavily if multiple plants get destroyed.

Being a high-stat zombie with

Frenzy and a dangerous ability, the best option to eliminate him and other Gargantuars with hard-removal cards such as Squash, Shamrocket, or Doom-Shroom. If that cannot be done, use

Freeze, Bounce, or play high-strength plants to knock him out of the running as fast as possible.

The best defense against his ability is to keep a diverse team of plants, ensuring that no two plants on the field are of the same type. Strategies involving Wall-Nuts, Snake Grass, Puff-Shrooms from Mushroom Grotto, and especially Pineclones should be extra wary, as the zombie hero has a high chance of playing this zombie to ruin your defenses. If you are using Pineclones, do not play her if Supernova Gargantuar's presence as his incredible ability and sufficient health allows him to survive and destroy all your copies. If you already have a squad of Pineclones to rush your opponent, consider using Molekale to help keep the team diverse before it gets too late.