N/A
The Super Ultra Ball is the ultimate in Plant-stopping projectiles. Fire it on the ground, or while airborne. It's your choice!

N/A
Fire an explosive ball of energy.
Super Ultra Ball is the first ability for Super Brainz in Plants vs. Zombies: Garden Warfare 2 and Plants vs. Zombies: Battle for Neighborville. When used, Super Brainz throws an explosive ball that deals up to 120 damage to the target, as well as a large amount of splash damage. It requires 17 seconds to recharge before being usable again. Its alternate abilities are the Super Multi Ball and the Super Guided Ultra Ball. 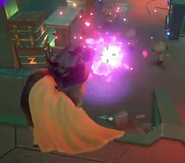