Deadly.
Draw a card.
That's the smell of victory!
Super Stench is a super-rare zombie superpower trick card in Plants vs. Zombies Heroes and a member of the

to play, and its ability gives all zombies on the field the

Deadly trait and draws a card.

That's the smell of victory!

This trick is very handy, especially against

Guardian heroes as both classes focus on boosting their plants' health.

A good strategy is to fill the lanes with cheap, weak zombies and then play this card so that any plants on those lanes are destroyed after combat.

If you are playing as Impfinity, one of the notorious strategies that will clear the field is to play this on zombies whose ability hurts multiple plants. The most well-known example is Barrel of Deadbeards, who will instantly destroy every plant when it is destroyed, but will also destroy all zombies besides the Captain Deadbeard made.

Space Ninja's ability functions the same as Barrel of Deadbeards, but does not destroy your zombies. However, you will need him to be in an environment. Gas Giant works as a multi-use Barrel of Deadbeards and hits the plant hero too, but it is much more expensive. However, none of them will work on

Armored plants. You can play as Impfinity to use Binary Stars for the effect against them.

If you are desperate for cards, you could play it to get one, although it is a waste unless you have some zombies on the field.

Once your opponent plays this card, any plant in front of a zombie will definitely be destroyed unless they are

Armored and are confronted by a zombie with 1 strength or less. The best scenario would be a one-on-one exchange on all lanes with zombies, but if that doesn't happen, either destroy them with bonus attacks, stall them by Freezing, or remove their

Deadly trait by Bouncing. However, the last solution is not recommended against zombies with powerful "When played" abilities.

If you want to prepare for this trick, either play Team-Up plants in front of your main plants, or play Force Field to completely nullify the zombies' attacks. But beware, as

Strikethrough zombies can bypass Team-Up walls, while Force Field can be overridden. 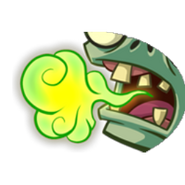 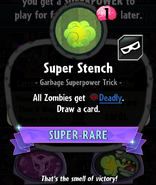 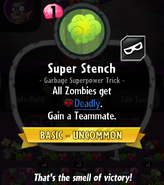 Example of using Super Stench (It gave the zombies on the field the Deadly trait, the zombie hero an Exploding Imp) 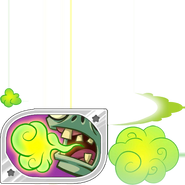 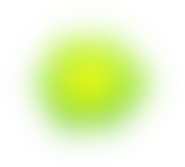