Rare
The Super Commando has seen more action and fought for more Brainz than any Zombie in the field. He comes with a "Can-do-it-if-I-want-to" attitude.

The Super Commando has seen more action and fought for more Brainz than any Zombie in the field. He comes with a "Can-do-it-if-I-want-to" attitude.

The Z4 Crossbow (Z3 Crossbow in Garden Warfare 2) is the primary weapon of the Super Commando. The facts below apply to a fully upgraded weapon.

By making a Zombie Makeshift Thingy, reload time has decreased.

Forget Zomboss Pellets, Commando makes his own ammo, providing a boost to damage.

The Z4 Crossbow's burst fire behavior requires greater accuracy than the Z1 Assault Blaster. It cannot sustain fire for as long as the latter but is quite versatile. At long range, the bursts are quite accurate and deal decent damage, while at close range, the bursts and the short reload time make for a rather dangerous weapon as the DPS value is very close to that of the Z1 Assault Blaster. If you have great accuracy, you can get three (or four, if upgraded) critical hits in one burst, which can deal massive damage to plants. In other words, the Super Commando can be considered a bit of a combination between the default Foot Soldier and the Camo Ranger, but on the contrary, it performs worse than either one in exchange for being much more versatile.

Despite him being only a Rare Zombie variant, the Super Commando is an extremely tough Foot Soldier variant to deal with, as his Z4 Crossbow can make him a serious threat at almost any range, especially at close quarters. He is less accurate at longer ranges; try vanquishing him before he gets close, as it can be lethal if all four (or even three) of his bullets hit you up close. 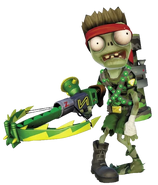 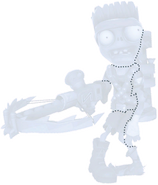 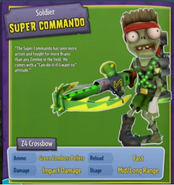 Super Commando in the character-selection screen 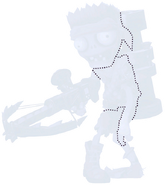 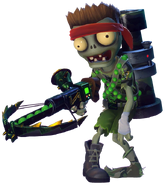 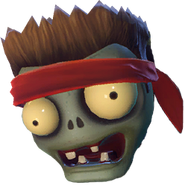 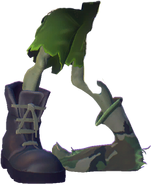 Super Commando in the customization booth

Concept art for Super Commando with Scientist, Astronaut, and Plumber