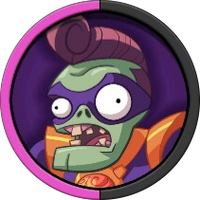 For the version in Plants vs. Zombies: Garden Warfare 2, see Super Brainz.

Super Brainz is a zombie hero in Plants vs. Zombies Heroes and a leader of the

Sneaky classes, alongside Huge-Gigantacus. His signature superpower is Carried Away, which moves a selected zombie to a selected lane, then makes that zombie do a bonus attack there.

He is the hero version of Zombie, and the starting hero for players on the zombies side.

He is based on the zombie class in Plants vs. Zombies: Garden Warfare 2 with the same name and appearance.

His hero description refers to Superman, a superhero created by DC.

His most heroic quality is his hairstyle.

Despite being the main starting zombie hero, Super Brainz is, in fact, one of the most technical zombie heroes there are. Super Brainz shines in his ability to use tricks and other things to strike the plant hero directly, like what Crazy Dave says. Having access to quite a few ways, including Smoke Bomb, Lurch for Lunch and Backyard Bounce, not to mention his signature superpower Carried Away, it is usually advisable to try to attack the plant hero all the time unless there is no way around the defending plants or the plant in question is something that requires attention.

Bullseye zombies like Wizard Gargantuar (and even Shieldcrusher Viking), so his strategy is moving these zombies into empty lanes as often as possible. Super Brainz is also known as the hero who rises up from the last moment, with the ability to move zombies away from the threat or giving them bonus attacks to clear the field of powerful plants.

Thanks to his Sneaky class, Super Brainz also has many strategies with gravestones, rivaling Impfinity and Neptuna in the number of gravestone zombies. Many Brainy zombies like Electrician, Gadget Scientist, etc., all benefit from being played again. However, Mixed-Up Gravedigger and/or Firefighter will be needed to reuse their effects, as only some Brainy zombies with reusable effects have the Gravestone trait.

Super Brainz also has plenty of ways to draw or Conjure cards, with not only the many choices from the Brainy class such as Fun-Dead Raiser and Regifting Zombie, but also with use of Imp decks with Imp Commander or Conjuring decks with Dr. Spacetime, Cosmic Scientist or others.

Super Brainz' weakness is that he does not have many options to stop rush decks, so Kabloom heroes can spam weaker plants and overwhelm Super Brainz from there. While Fire Rooster and Trapper Zombie can somewhat help, their abilities can only do so much against threats with high-health. The best Super Brainz could do for a situation like this is using a rush deck himself, preferably with a few

Be careful when facing Super Brainz as merely blocking the zombie is usually not enough. The best way to counter him is to destroy his zombies outright before the tricks phase with cards like Berry Blast, Cherry Bomb, Squash or Sour Grapes, to damage or destroy zombies. While these are mostly from the Solar and Kabloom classes, Guardian heroes usually have the ability to fill the lawn with high health and Team-Up plants so there is no way to hit the hero directly, or use Grave Buster to destroy gravestones, while Smarty heroes can

Freeze or Bounce zombies to prevent them from attacking. This means that every hero has to find a way to counter Super Brainz' strategy.

Retrieved from "https://plantsvszombies.fandom.com/wiki/Super_Brainz_(PvZH)?oldid=2298023"
Community content is available under CC-BY-SA unless otherwise noted.