Super Brainz is an

Attack class zombie in Plants vs. Zombies: Battle for Neighborville. His ranged Heroic Beam weapon from GW2 has been replaced with the Alpha Better Shield in order to make Super Brainz more melee-oriented. However, Super Brainz can now charge his fist akin to Cozmic Brainz to fire a powerful projectile as a ranged option. Finally, his Heroic Kick has been replaced with the Hyper Jump Thump.

Super Brainz's primary weapons are the Heroic Fists, a 3 punch combo with short delays between each combo. The first punch deals 30 damage, the 2nd punch hits 35 damage and the last punch deals 42 damage. (if you have the Ultra Combo ability, he does 50 damage on the 4th punch) While punching, he has a slightly reduced movement speed. Heroic Fists cannot deal critical damage.

Hyper Jump Thump can be used to jump up ledges or open a fight by dealing damage and pulling plants towards you. It can also be used as a set up for Turbo Twister by pulling lots of plants closer, the Super Ultra Ball can be used to vanquish weak enemies like Acorns or Night Caps or as a finish movement if you are low health to vanquish the weakened enemy and search for a Scientist or wait to auto-heal, the Turbo Twister isn't very powerful but the reduced damage can be used for a fast escape or regenerate health with the regenerate upgrade (you need to have an elite Super Brainz) in a situation that you can't escape and you are low health

You want to keep as much distance between you and Super Brainz as possible, due to the huge damage output he has. You can approach and attack if you are a Chomper. It's recommended to use Grody Goop and move in a circle while you attack him or Burrow him 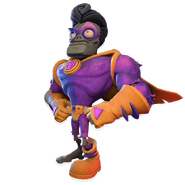 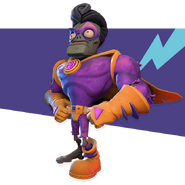 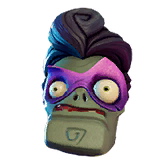 His icon
Add a photo to this gallery
Retrieved from "https://plantsvszombies.fandom.com/wiki/Super_Brainz_(PvZ:_BfN)?oldid=2225130"
Community content is available under CC-BY-SA unless otherwise noted.