When the slots land on 3 Super Bean icons, a Super Boss Wave will occur. Super Bean emerges from the ground in a cutscene and chuckles loudly. During a Super Bean wave, Mystic Flowers and Zen Cacti appear often, as well as a metal variant (either Metal Petal, Armor Chomper, or Iron Citron).

He goes warping around super fast, so he can be hard to hit, similar to Baron von Bats. Destroying the shield quickly is a great help, and Super Brainz's Turbo Twister and Engineer's Jackhammer are quick methods of doing so. There is a big problem, however, Super Bean can stop certain abilities with his spin attack and his Overbean can reduce damage dealt to him. However, he does not have many methods of attacking, so dodging this boss's 3 attacks should be easy. Due to a glitch, Roadie Z can damage his shield twice instead of once per fire unit. 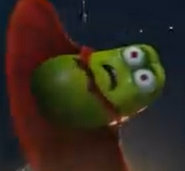 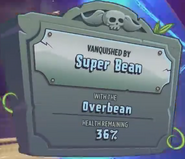 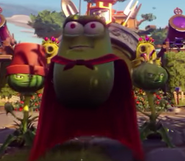 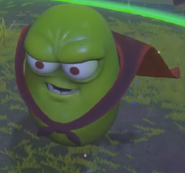