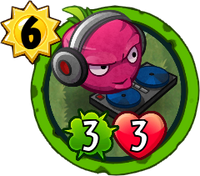 for each Plant and Zombie.
When he drops the beet, everyone feels it. Especially the Zombies.

Super-Phat Beets is a premium rare plant card in Plants vs. Zombies Heroes and a member of the

for every plant and zombie on the field when he is played.

He is based on the beet (Beta vulgaris), a plant in the Betoideae subfamily in the Amaranthaceae family; and a disc jockey (or DJ for short), a person who plays existing recorded music for a live audience.

His name is a portmanteau of the phrase "super-phat beats," referring to his turntable, and "beet," the real-life plant he is based on.

His description makes a pun on the word "beat" as well as the phrase "drop the beat", which means to start playing music.

When he drops the beet, everyone feels it. Especially the Zombies.

Being such an expensive plant, he should be saved until later in the game, as he can become a really strong plant if played correctly, possibly getting up to +14

if all lanes are filled. However, be warned that your opponent can destroy him by using various tricks, so try to never rely only on him and play other strong plants besides him. It is recommended to bring plenty of Team-Up plants such as Torchwood or Sweet Potato along with this, as they will allow you to have a large number of plants on the field to help this by a lot. A good time to play this card is when the opponent floods the field, as Super-Phat Beets can get boosted by up to +5

from only the zombies.

Captain Combustible can support this plant greatly as he has access to many swarming cards such as Shroom for Two and Mushroom Grotto, which can easily fill the field with plants and boost Super-Phat Beets.

Because of his ability, Super-Phat Beets is naturally susceptible to instant-kill tricks. However, since plants go second, the plant hero has the advantage of being able to play him on a turn where you don't have a lot of brains saved up for tricks, ensuring that this plant will land a devastating attack on your hero or a powerful zombie. When this card is played, try to destroy him as quickly as possible as he can take out a large chunk of your hero's health in a single hit. Using

Deadly zombies such as Smelly Zombie or Toxic Waste Imp should destroy him easily. Rocket Science and Cut Down to Size can be good options, due to the huge amount of strength Super-Phat Beets can gain. For times when this becomes a bigger threat, your best bet is to either Bounce him with cards such as Backyard Bounce, or flat out destroy him using Locust Swarm or Zombot Sharktronic Sub. 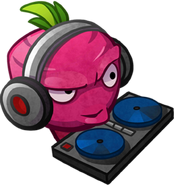 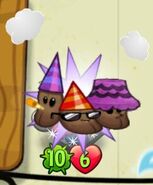 Time to Shine being used on Super-Phat Beets

Super-Phat Beets on the Premium Pack 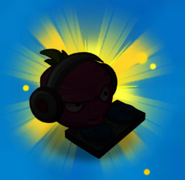 Retrieved from "https://plantsvszombies.fandom.com/wiki/Super-Phat_Beets?oldid=2282884"
Community content is available under CC-BY-SA unless otherwise noted.