An all-too-enthusiastic imp who explodes with rah-rah-rah fervor.

Explodes on contact with plant after reaching certain column, either by walking or being kicked by

(damages the Imp even when airborne)

(shrinks it into oblivion)

(stops it in midair)

(Plant Food stops it in midair)
Wall plants and leveled up plants can sustain several and a few explosions respectively.

Modern Day - Day 6
Super-Fan Imp has season tickets, subscribes to the team newsletter, and is super pumped about exploding on contact with fans of the opposing team.
Super-Fan Imp is a zombie encountered in Modern Day in Plants vs. Zombies 2. When it reaches the third column, it will explode, dealing damage enough to destroy a level-1 plant on the tile the Super-Fan Imp explodes. In addition, it can be kicked to anywhere from the first to third column by an All-Star Zombie.

An all-too-enthusiastic imp who explodes with rah-rah-rah.

Super-Fan Imp has season tickets, subscribes to the team newsletter, and is super pumped about exploding on contact with fans of the opposing team.

Super-Fan Imp deals 301 damage when exploded, which is exactly 1 point more than most level-1 plants' toughness. This means that a leveled-up plant can withstand a single Super-Fan Imp explosion, though higher level is required to tank multiple onslaught such as in Highway to the Danger Room, in which point it's safer to counter them with Blover while they're being thrown. 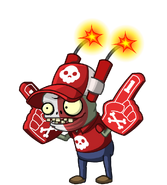 A Super-Fan Imp about to land on a powered Moonflower

A Super-Fan Imp explodes after reaching a certain column 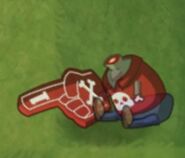 Three Super-Fan Imps on the seed selection in Highway to the Danger Room (super rare, very uncommon in early levels)

Super-Fan Imp floating back in time 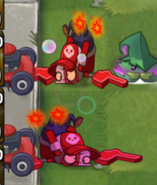 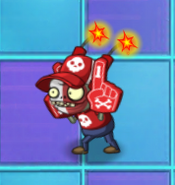 Hypnotized Super-Fan imp coming out of a Cake Tank (Animated) 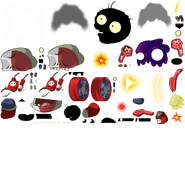