this turn.
Compared to his little brother, he's the one with the sunnier disposition.
Sunnier-Shroom is a triassic uncommon plant card in Plants vs. Zombies Heroes and a member of the

Solar class. He can also be transformed by Sun-Shroom. He costs 3

He has the Team-Up trait, and his ability gives the plant hero +2

at the start of every turn, starting from the next turn after he is played or transformed (if created using Sun-Shroom). This ability stacks with each Sunnier-Shroom on the field and persists until all Sunnier-Shrooms are removed from the field.

He is likely based on Sun-Shroom's ability to grow and produce more sun in the main series.

Compared to his little brother, he's the one with the sunnier disposition.

Just like any other sun-producing plant, Sunnier-Shroom is best destroyed before he can produce any sun. The only problem is his Team-Up trait that lets him hide behind tough plants. Damaging tricks, Rolling Stone, Weed Spray, Knockout, and

Strikethrough zombies are good counters to him, although the only unboosted

Strikethrough zombies that can instantly destroy him are Line Dancing Zombie, Blowgun Imp, and Zombot Plank Walker (and the latter two are too expensive to be a counter for this plant). 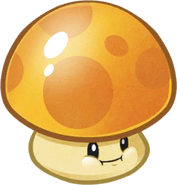 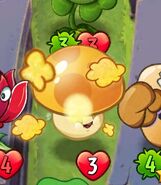 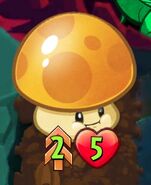