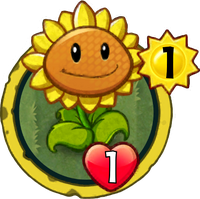 For other uses, see Sunflower (disambiguation).

this turn.
"Not to brag, but I'm pretty much your basic franchise-founding superstar."
Sunflower is a basic common plant card in Plants vs. Zombies Heroes and a member of the

Solar class. It can also be made by Solar Winds and Sunflower Seed. It costs 1

. It has the Team-Up trait, and its ability gives the plant hero +1

at the start of every turn, starting from the next turn after it is played. This ability stacks with each Sunflower on the field and persists until all Sunflowers are removed from the field.

In the boss battle of the mission KO at the OK Arcade, Solar Flare starts with a Sunflower on the third lane.

Also, in the boss battle of the mission Game Time! Flame Time!, Solar Flare starts with two Sunflowers each on the third and fourth lanes.

It is based on the plant in Plants vs. Zombies with the same name.

Its attack is the same as its form in Plants vs. Zombies: All Stars.

Its description makes a reference to how it is one of the mascots of the Plants vs. Zombies series.

"Not to brag, but I'm pretty much your basic franchise-founding superstar."

Sunflower is a simple and basic ramping card, holding a very simplistic statline and trait to go by.

It's one of the earliest cards you get, but sadly, that seems to be where its best use is as it's for the most part, not a very good card. It's best utilized when gotten out of better ramping tools like Sunflower Seed or Solar Winds, but even then, those cards are not doing very good right now after a balancing patch.

So if a ramping deck with flowers in mind is considered, this card just isn't for it. Twin Sunflower is just better in nearly every way, and really outclasses this harshly, as well as Primal Sunflower. As a 1

this also finds itself outclassed there (since it's far from flexible in other decks). It's designed for only a few decks, but even those decks don't really want this card.

There is only one combo that works with Sunflower being Sunflower + Mixed Nuts. On turn 1, play Sunflower. On turn 2 Sunflower +1 ablity gives the 3 cost Mixed Nuts 2/2 to 4/4 which most early game zombies cannot deal with.

So in summary, this is just a card that doesn't have much place in any decks and isn't really recommended at all.

Sunflower probably has one of the most unprotected and weakest possible unit statlines with the only thing to note being its Team-Up trait. That's the only thing you should keep in mind if you want to get rid of it, as most players who likely play this will take defensive measures of it. It's terribly weak to most basic small removal cards.

Just be aware of its consistent ramping ability, but you're better off focusing on your own plays than this. But if you suppose it's a threat, again, most basic removal and interaction gets rid of this.

Retrieved from "https://plantsvszombies.fandom.com/wiki/Sunflower_(PvZH)?oldid=2317907"
Community content is available under CC-BY-SA unless otherwise noted.