for the rest of the game.
Solar Flare never met a sunscreen strong enough to stop her.
Sunburn is Solar Flare's premium legendary plant signature superpower trick card in Plants vs. Zombies Heroes and a member of the

to play, and its ability does 2 damage to a selected zombie or the zombie hero and gives the plant hero +1

at the start of every turn for the rest of the game, starting from the next turn after it is played. Its closest zombie counterpart is Cryo-Brain.

This is one of the superpowers that is best played in the early game, because the sun bonus benefits you for the entirety of the match. You can either play it to destroy any 1-brain cost zombie (excluding Headstone Carver, Cat Lady, Iron Boarder, Planetary Gladiator, and Quickdraw Con Man), play it a bit later for threatening ones like Pool Shark and Cuckoo Zombie, or Amphibious zombies due to Solar Flare's lack of Amphibious plants. If you have chosen to keep this superpower until late game, you can also use it on your opponent to finish them off if they have 2 or less health left. Do not use this on Knight of the Living Dead or shielded zombies, since they will go unaffected.

Even though you will get more sun after you play Sunburn, be careful with your cards. Remember that Solar Flare leads the Kabloom class, which is known for its cheap cards, and the Solar class, which is known for extra sun production. Put these two together, and you get an easy way to use all your cards within a single turn, leaving nothing for later defenses, also due to Solar Flare lacking reliable ways to draw cards.

While 2 damage isn't really a lot for a signature superpower, its sun bonus is the dangerous part.

Since there is no real counter to this trick other than to play Defensive End to make it more expensive (which is not a very effective response anyway), your only way is to hope your opponent doesn't get this as their starting superpower. Or, you can defeat your opponent before the sun bonus tips the scales to your opponent's favor greatly. If you are at low health and she still hasn't played this yet, try to keep your health topped with cards such as Medic and Nurse Gargantuar as Solar Flare can use it to finish you off, ending the game in her favor.

You can also play Cryo-Brain if you are a

Brainy hero to even out or increase your amount of brains you get each turn if Sunburn is played. 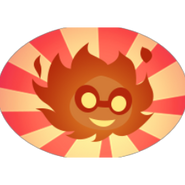 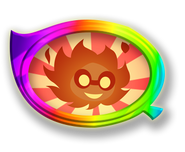 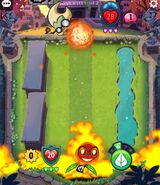 Rose playing Sunburn due to a glitch 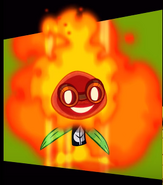