Super Rare
Little was known about the Sun Pharaoh until her sunflower-shaped pyramid was discovered in the early eighteenth century. According to the local hieroglyphs she enjoyed long walks on the beach, had many catnip companions and enjoyed eating chicken salad sandwiches.

Rare
Little was known about the Sun Pharaoh until her sunflower-shaped pyramid was discovered in the early eighteenth century. According to the local hieroglyphs she enjoyed long walks on the beach, had many catnip companions and enjoyed eating chicken salad sandwiches.
Sun Pharaoh is a Super Rare variant of the Sunflower in Plants vs. Zombies: Garden Warfare and Rare Plants vs. Zombies: Garden Warfare 2. She was added in the Zomboss Down DLC Pack.

Sun Pharaoh, as with the other variants of Sunflower, is based on the common sunflower, an annual forb of the genus Helianthus grown as a crop for its edible oil and edible seeds. She has an appearance, title and background similar to Cleopatra, one of the most famous Egyptian pharaohs of all time.

Little was known about the Sun Pharaoh until her sunflower-shaped pyramid was discovered in the early eighteenth century. According to the local hieroglyphs she enjoyed long walks on the beach, had many catnip companions and enjoyed eating chicken salad sandwiches.

The primary weapon of Sun Pharaoh is the Cobra Laser; all facts below apply to a fully upgraded weapon.

The Sun Pharaoh's primary weapon is the Cobra Laser. It is the 3 round burst weapon that deals more damage than the standard Sun Pulse, at around 10 to 13 impact and 12 to 15 critical, at a slower rate of fire.

By watching snakes at the zoo, she has found new techniques to reload faster.

A new technique to cut snake gems increases the intensity of the heat released, providing a boost to damage.

The Sun Pharaoh's primary weapon aids her in 1v1 matchups, due to her potential damage per second far exceeds any Sunflower variants due to her high rate of fire and her projectile's damaging properties. This helps the Sunflower to protect itself better as well as being less reliant on other plants.

However, it should be noted that the weapon fires in 3-round bursts, which require great accuracy from the player. If you are inaccurate, some or all of your shots might miss. Zooming in can combat this weakness. In Plants vs. Zombies: Garden Warfare 2, the player can now hold down the trigger and keep firing, although it will still fire in the normal way.

The Sun Pharaoh's primary weapon only fires in bursts of 3, making it difficult for some players to hit their target. If you know you're not that good of a shot, try to travel with your teammates. Keeping your allies alive is always a priority as a sunflower. Revive fallen teammates as soon as you see them get taken down.

A tip for using this primary is to strafe (move your actual character until the target is in the center of your crosshair).

A more constant DPS figure is output from the Sun Pharaoh, so it is important to either keep moving, as a glass cannon like the Imp, or to make every shot count as a tank like Super Brainz or the All-Star.

As with any Sunflower, it is vital to keep damaging it before it can place a Heal Flower or be healed by other Sunflowers. As long as the enemy player cannot land too many shots, as the Cobra Laser demands decent accuracy, a fight with the Sun Pharaoh won't be too much of a problem.

If the opposing player is very accurate, such as if they are a PC player, then increasing the distance between them and you won't do the trick, as damage drop-off, high bloom, and maximum weapon range do not affect the Sun Pharaoh. Instead, you will have to take cover, for example behind the All-Star's Dummy Shield; fire when you can.

The fire pattern of the Cobra Laser is uneven, as it is a 3-round burst, so they will find it hard to hardscope/continuously fire at your position, so in between bursts or during reloads is the best time to fire answering shots. 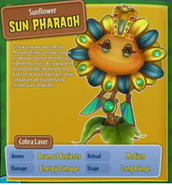 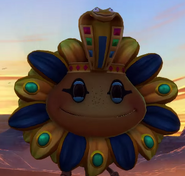 Sun Pharaoh in the Zomboss Down Trailer 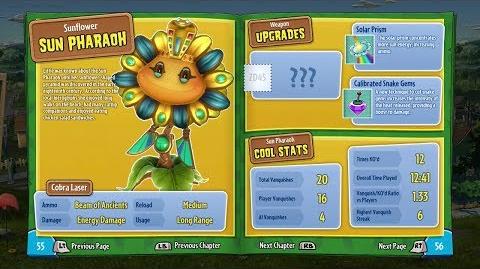