Not to be confused with Sizzle, a trick from Plants vs. Zombies Heroes.

Sun Bombs is a Brain Buster in Plants vs. Zombies 2 unique to the Far Future. In this Brain Buster, sun is replaced with destructive purple sun. If the player taps the sun while it is still purple, it will deal 500 damage per shot to any zombies and destroy non-defensive plants in a 3x3 area around it, while dealing damage to defensive plants. When the sun falls all the way down, it will turn into normal sun, and like them, it disappears if not collected quickly. Sun-producing plants cannot be used in these levels. It is played in Far Future - Days 4, 19, 24, 30, and 34, as well as Solar Tomato's Warped Tournament in Arena.

Sun drops from the sky far more often in these levels, and it is up to the player whether they want to collect the sun, or use it as an attack towards the zombies. It is very useful for hordes of zombies that are attacking the plants. 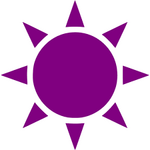 The Sun Bombs of the Far Future may be a reference to the steadily increasing temperatures of the real Earth's atmosphere, also known as global warming. The damaging purple sun (possibly ultraviolet light, which is also purple on the electromagnetic spectrum and dangerous to the skin from direct exposure as it can cause skin cancer) may also be a reference to decreased UV protection resulting from the destruction of the ozone layer as more and more gas emissions come from machinery. 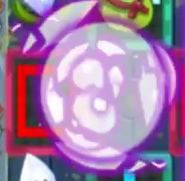 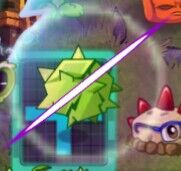 A Sun Bomb exploding as Primal Peashooter's pea passes through it