For other uses, please refer to the Sun-shroom (disambiguation) page. 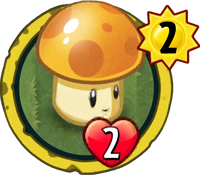 this turn and this transforms into a Sunnier-Shroom.
"Fun in the Sun? That's for other Plants. I just make the stuff. I don't actually like it."
Sun-Shroom is an event plant card in Plants vs. Zombies Heroes and a member of the

. He has the Team-Up trait, and his ability gives the plant hero +1

and transforms him into Sunnier-Shroom at the start of the next turn after he is played.

He is based on the plant in Plants vs. Zombies with the same name and appearance.

His description references his Suburban Almanac entry from Plants vs. Zombies.

His second ability is a reference to Sun-Shroom's ability to grow in size in the Plants vs. Zombies series.

"Fun in the Sun? That's for other Plants. I just make the stuff. I don't actually like it."

Sun-Shroom can be treated as Sunflower that costs 1 sun more, but has 1 extra health. And in addition, he turns into a Sunnier-Shroom if he survives onto the next turn, which becomes a better version of Twin Sunflower with 3 health instead of 2. Due to Sun-Shroom transforming into another plant the next turn, he can be played on either an empty lane or in front of a zombie with 1 strength or less, so that he can survive this turn and transform into a bulkier plant at full health the next turn.

Chompzilla can use Sun-Shroom in succession with Muscle Sprout as when he transforms into Sunnier-Shroom, Muscle Sprout will activate its ability again. She can also boost him with cards like Fertilize and Plant Food to help keep him alive. Finally, she can use Black-Eyed Pea to discourage her opponent from using tricks to destroy him, or Umbrella Leaf next to Sun-Shroom to protect him from zombie tricks.

Solar Flare can use him as an alternative to Sunflower in mushroom decks, as being in the mushroom tribe, he can benefit from Buff-Shroom and Punish-Shroom. However, do not play Buff-Shroom until he turns into Sunnier-Shroom, as his stat boosts will be erased when he transforms. She can also use him to activate Astro-Shroom's ability twice.

Wall-Knight is able to increase his strength with Three-Nut, allowing him to retaliate. (Three-Nut's strength boost also applies to Sunnier-Shroom.) If Sun-Shroom successfully transforms, he can use tough plants like Wall-Nut to protect Sunnier-Shroom, move him with Gardening Gloves or Bubble Up, and increase his health with Steel Magnolia or Photosynthesizer.

Rose does not have many uses or synergies with this, but she can use Shellery and other Team-Up plants to protect Sun-Shroom, and

Freeze, Bounce, or destroy zombies that threaten him. And because he has the Team-Up trait, she can boost him and Sunnier-Shroom with Go-Nuts to make him a bigger threat.

Sun-Shroom will transform into a bulkier plant that gives more sun to your opponent per turn, so it is highly advised to destroy him before the situation becomes more irritating. Since he has no strength, you can easily destroy him with Rolling Stone or Bungee Plumber.