For the almanac in Plants vs. Zombies 2, see Almanac.

The Suburban Almanac is a book containing data on all the plants the player owns and all the zombies that the player has encountered in Plants vs. Zombies. It is obtained after beating Level 2-4 in Adventure Mode for the first time. Each time a new zombie appears in the seed choosing menu at the start of a level, a new card appears with the zombie name and picture but instead of a description, there is a message reading ”(not encountered yet)”.

Although important information like damage, recharge, and cost are shown for each plant and similar statistics are included for each zombie, some information is wrong or misleading and some is missing altogether. The flavor text for each entry is fairly humorous and may include jokes or references to other parts of the game, other games or other companies entirely.

It can be accessed from the Main Menu, in the plant selection screen by clicking on the Almanac button, in the pause menu, or on a specific zombie in the seed selection screen. Almanac entries for zombies and plants do not appear until they have been obtained or encountered.

The Suburban Almanac’s appearance on the Main Menu

Suburban Almanac on the DS/DSi version

Obtaining the Suburban Almanac in the PC version

Obtaining the Suburban Almanac in the Android version

Almanac in Java version (note it isn't a book, and accessible even before playing the game)

The book
Add a photo to this gallery

Imitater's entry in the Almanac

Part of the plants' Almanac entries in the iPod version

The zombies' Almanac in the PC version

Completed Almanac on the iPad version 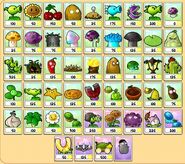 Another completed Almanac on the iPad version

Retrieved from "https://plantsvszombies.fandom.com/wiki/Suburban_Almanac?oldid=2359903"
Community content is available under CC-BY-SA unless otherwise noted.