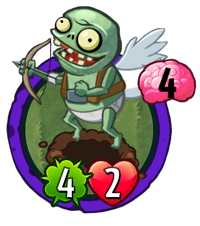 When played: Do 1 damage to a Plant. That Plant has 0

this turn.
What's love got to do with it? Honestly, he has no idea.
Stupid Cupid is an event zombie card in Plants vs. Zombies Heroes and a member of the

. He does not have any traits, and his ability does 1 damage to a plant, then resets that plant's strength to 0

He was added in the 2017 Valenbrainz event, along with Sportacus and Hot Date. He became craftable as of update 1.12.6.

He was made available in the Cupid's Valenbrainz event and was available from February 14, 2017 to February 21, 2017.

He is based on Imp's Valenbrainz costume. However, instead of a harp, he has a bow.

His description is a reference to the song "What's Love Got to do With It" by Tina Turner.

What's love got to do with it? Honestly, he has no idea.

Stupid Cupid is not a very cost-effective 4-brain card in terms of stats, with his low health and mediocre strength. However, he has a potentially game-changing ability, completely preventing a plant from attacking for the turn he is played.

When you play him, don't target plants with no strength at all, like Wall-Nut and Water Chestnut. Also, don't target plants that would be destroyed by the initial damage of the ability, unless that plant is a powerful glass cannon like Mushroom Ringleader or Magnifying Grass or if taking control of the field is necessary. If you do either of these things, you will waste the most effective capability of this zombie.

Do not use this zombie against Hibernating Beary, because its ability increases its strength instead of draining it. However, if it is on the verge of destruction, it may be worth it. You could also boost it so you can use Rocket Science on it the next turn, but this is very risky.

While he is an Imp zombie, his ability cannot synergize with Imp Commander due to it only being able to target plants. However, with Toxic Waste Imp, Stupid Cupid's ability becomes very threatening due to any non-

Armored or shielded plant being instantly destroyed via his

Deadly trait. (Laser Base Alpha and Zombot Sharktronic Sub can substitute Toxic Waste Imp.) This combo is only possible with Impfinity. Speaking of Impfinity, he can also make Stupid Cupid reactivate his ability via Firefighter, In-Crypted, or Mixed-Up Gravedigger if he manages to survive a turn.

If you are playing as Z-Mech, you can combine Rolling Stone or Weed Spray to destroy any plant you want, especially those that gain strength over time such as Pea Pod, Bean Counter, Snowdrop, Bananasaurus Rex, Doubled Mint, etc. This greatly improves Z-Mech's survivability against

Mega-Grow heroes. Electric Boogaloo can combine Stupid Cupid with Evaporate to destroy a plant instantly or play Secret Agent to create a big threat, but neither of these strategies are recommended as there are cheaper combinations that are equally, or more effective.

Smarty can play Rescue Radish to Bounce the affected plant and undo both the strength drop and the damage dealt.

Guardian heroes have access to Spineapple and Loco Coco, although they will most likely play them only when there are enough 0

plants out. Fortunately, you still have the Zombie Tricks phase to work things out.

Statwise, Stupid Cupid is fairly easy to destroy, but his ability is very dangerous as it will completely disable a plant from attacking for the turn he is played. But if you are not playing as Rose, you can play boosting cards to attempt to boost your plant back up again. Smarty heroes can use Rescue Radish to Bounce the affected plant, and it can potentially be played again on the same turn.

If your opponent is either Z-Mech, Electric Boogaloo, or Impfinity, you should be extra wary as they have access to cards that can work in tandem with Stupid Cupid's ability. A good counter is to use plants that activate their abilities when hurt or destroyed, like Galacta-Cactus, Mirror-Nut, Hibernating Beary, Pear Cub, Grapes of Wrath, Punish-Shroom, and Briar Rose. Stupid Cupid cannot disable the abilities of plants, so use such plants to apply pressure on your opponent. (However, Electric Boogaloo has hard removal cards which bypass such abilities.) You can also play multiple threats to force your opponent to consider which plant needs to have its strength taken away. 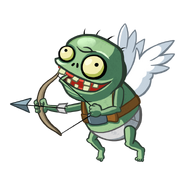 Stupid Cupid on the background of a Valenbrainz Multiplayer match 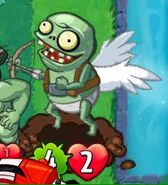 Gigantic Stupid Cupid due to a glitch

Stupid Cupid on the advertisement for the Event Rewind Bundle

Gigantic Stupid Cupid tinted gray due to two glitches at once 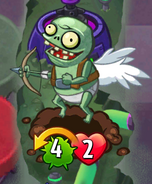 Overshoot trait due to Moon Base Z

Stupid Cupid being the featured card in the menu for the February 3rd, 2018 Daily Challenge

Stupid Cupid being the featured card in the menu for the May 2nd, 2020 Daily Challenge