Rare
Stuffy Flower is a Rare variant of the Sunflower in Plants vs. Zombies: Garden Warfare 2. She was revealed in a short video clip on November 12, 2015, on the Plants vs. Zombies Facebook and Twitter[1] pages. Each vanquishing blow from her primary weapon will drop multiple sundrops, similar to the sundrops produced by the Heal Flower, that can heal teammates. However, like the Power Flower and Vampire Flower, she can only fire 40 shots before needing to reload, compared to the normal Sunflower's 50 shots.

If you thought the Stuffy Sunflower was all sunshine and rainbows, well... you'd be right! Luckily, Zombies can't stand sunshine, and they positively despise rainbows.

Vanquishing with her Rainbow Sunburst causes healing sundrops to appear!

This variant is perfect for any healers who like to get a lot of vanquishes. Stay near your teammates and use your abilities to heal them while vanquishing enemies. Focus your aim on zombies nearby teammates, most notably heavy characters, like the Chomper or Citron. This will maximize the effect of the sundrops that spawn after getting a vanquish. Remember to never go into the center of the fight, rather stay back a little bit and provide both offensive and healing support. It is recommended to try to stay away from zombies such as Scientists and All-Stars, who could vanquish you easily. For every vanquish she makes, healing sundrops will fall near the vanquish point. Due to these sundrops, the need for a Heal Flower or Rainbow Flower are not as vital as they are normally for a Sunflower, but they are still important.

Stuffy Flower is a powerful threat to any lone zombie due to the fact it has the Rainbow Sunburst, which will heal any nearby plant with those healing drops, most notably Chompers and Citrons. Try to vanquish her either in a group, or as a heavy character like Super Brainz. If you are alone and have average or low health, this variant could vanquish you easily and provide healing to her nearby teammates. Another good strategy is vanquish her with any sniper. This will be safer and more effective. The sounds her primary weapon creates will help any zombie to locate the position of a Stuffy Flower, so use this as an advantage to locate and vanquish her as soon as possible.

The player got vanquished by a Stuffy Sunflower's primary attack

Stuffy Sunflower in the stickerbook 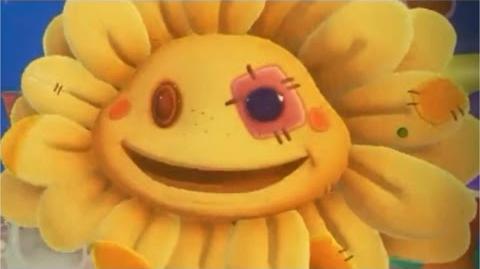 Retrieved from "https://plantsvszombies.fandom.com/wiki/Stuffy_Flower?oldid=2023792"
Community content is available under CC-BY-SA unless otherwise noted.