When you play a Berry, do 1 damage to Zombies next door to Strawberrian.
Berry Evolution: Gain a Berry Blast.
When it's time to fight, he gets pretty juiced.

Strawberrian is a triassic super-rare plant card in Plants vs. Zombies Heroes and a member of the

. He does not have any traits, and his ability does 1 damage to the zombies on the lanes adjacent to him every time a berry card is played, while his Berry Evolution ability gives the plant hero a Berry Blast. This ability stacks with each Strawberrian on the field and persists until all Strawberrians are removed from the field.

He is based on the strawberry, a widely grown hybrid species of the genus Fragaria that is cultivated worldwide for its fruit.

His name is a portmanteau of "strawberry," the real-life plant he is based on, and "barbarian," a person long ago in the past which was considered wild and uncivilized, referring to his appearance, animations, and description.

When it's time to fight, he gets pretty juiced.

Strawberrian is just an average fighter, a bit on the frail side, but his abilities can be a huge help for you and can easily devastate the zombies with enough support.

Strawberrian's normal ability doesn't do that much damage, but it is handy against glass cannons or if there are zombies next to Strawberrian. It also provides offensive support for your other plants. This gets even more dangerous when paired with High-Voltage Currant, Pair Pearadise, or Sergeant Strongberry. High-Voltage Currant gets +1

per zombie damaged, allowing them to hit harder. Pair Pearadise doubles the berries played, which in turn doubles the damage done by Strawberrian. And finally, Sergeant Strongberry does 2 damage to the ones right after Strawberrian does damage, resulting in 3 damage to each of the two zombies per berry played. His ability bypassing

Untrickable is also a bonus.

Strawberrian's Evolution ability is also helpful. While it doesn't bump up Strawberrian's value very much unlike many other Evolution cards, it serves as an extra efficient method of damage and ability activation, and also card gain for Dino-Roar cards, although minor. Also, it is highly recommended to carry Shelf Mushrooms in your deck if you want to activate said ability, as the only other berries playable before turn 3, High-Voltage Currant and Wild Berry, have only 1 health. While you can play them on an empty lane, Shelf Mushroom is a much safer choice.

However, Strawberrian's ability is nullified by

Armored zombies. It also can't hurt your opponent directly, so it becomes less powerful if they either spread out their zombies or don't have many on the field. Still, since you will be rushing out with berries, you will rack up a lot of damage on your opponent if they choose to do so. Also, take note that his ability does not affect his lane, so you have to be more careful where you play him. It is recommended to have Team-Up plants to guard Strawberrian from zombies on his lane.

Here is a list of berry cards for easy reference:

You must watch out for Squirrel Herder, since he is a berry plant. Once she is revealed from her gravestone, she can take him out easily.

Strawberrian isn't the strongest fighter in the game, but his abilities can be troublesome. Your opponent will play as many berries as possible, bombarding you with lots of damage early to mid-game. If you can live through, or control the early game, Strawberrian will be less of a threat. However, if you are running a rush deck, and you don't have damaging cards that can destroy Strawberrian, he will easily ruin your strategy, or at least cause a dent in it. Fortunately, he does not have good health for his cost, meaning he is very vulnerable to most cheap removals such as Bungee Plumber and Extinction Event. His ability also cannot affect the lane he is on, so there is no risk of your zombie being destroyed via his ability before it destroys him.

Even if you destroy Strawberrian, there will be the other berries to deal with. Since most of them have low health, it is best to use mass-damaging cards like Fireworks Zombie and The Chickening.

The best way is to play Squirrel Herder, as she can destroy him since he is a berry plant, However, since she has the Gravestone trait, Spudow can use Grave Buster or Blockbuster to destroy her whilst in her gravestone, while Nightcap has access to Spyris to reveal her, Grave Mistake to Bounce her and Cool Bean and Winter Squash to Freeze and then destroy her, all whilst in her gravestone, so beware of those. 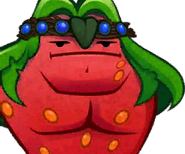 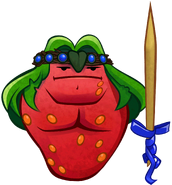 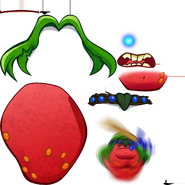 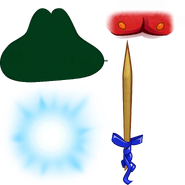 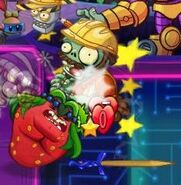 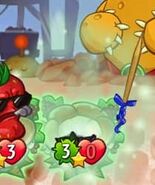 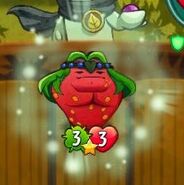 Evolved Strawberrian on the field 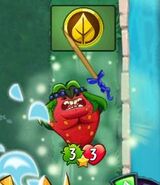 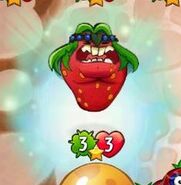 Small Strawberrian due to a glitch 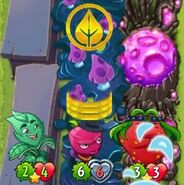 Vegetation Mutation being played on Strawberrian, Doubled Mint, and Tough Beets
Add a photo to this gallery

Retrieved from "https://plantsvszombies.fandom.com/wiki/Strawberrian?oldid=2291294"
Community content is available under CC-BY-SA unless otherwise noted.