Dino-Roar: All zombies in your hand get +1

.
With a cerebellum the size of a Wall-Nut, it specializes in oversized bodies for little brains.
Stompadon is a colossal legendary zombie card in Plants vs. Zombies Heroes and a member of the

It does not have any traits, and its Dino-Roar ability gives all zombies in the zombie hero's hand +1

. This ability stacks with each Stompadon on the field and persists until all Stompadons are removed from the field.

It is based on a Stegosaurus, a genus of herbivorous thyreophoran dinosaur, specifically the one found in Plants vs. Zombies 2.

Its name is a combination of "stomp" or "stomper"; and "don," the taxonomic affix for "tooth" that is used for the names of many dinosaurs.

Its "When destroyed" animation may be based on the stegosaurus' ability in Plants vs. Zombies 2, where it flings zombies off with its tail.

With a cerebellum the size of a Wall-Nut, it specializes in oversized bodies for little brains.

This card has below average stats for its cost but a useful ability, meaning it is more suitable as a support zombie on the field. Its main purpose is to boost all the zombies in your hand, making them harder to deal with. However, you have to ensure that your opponent has to deal with other threats simultaneously, or it will be easily destroyed. The deck in mind should also be focused on either card draw or Conjuring to maximize its ability, because otherwise, it will not be as useful.

A possible but very luck-based strategy, dubbed the "Miracle setup" in which you have three Zombology Teachers on the field and then play Going Viral, which costs 0 brains due to the combined abilities of all the Zombology Teachers, and then keep getting Going Virals, can be used with Stompadon to also heavily boost the zombies in your hand or even create a loop, making it very hard for your opponent to make an attack.

Rustbolt has the best usage out of all Hearty heroes due to his easy access to card draw options like Fun-Dead Raiser, Regifting Zombie, and Kite Flyer and massive card gain via Triplication and Pot of Gold. He is also able to safely play it in the Zombies Trick phase via Teleport or Teleportation Zombie. If Stompadon has activated its ability enough times, bonus attack cards like Gadget Scientist or Lurch for Lunch can finish off your opponent.

The Smash could use this in his pet deck alongside Cat Lady and Zookeeper. However, pet decks are known for their aggressive playstyle and the need for mass deployment of pet cards. Stompadon will be very slow in such a deck, meaning it will not be as useful.

Besides, the only way for the Beastly class to reliably draw cards is via Interstellar Bounty Hunter, which is not run in pet decks typically. He could use

Beastly stat-boosting cards on Stompadon, but he is better off just using Hearty cards to do so if he really must boost its stats, unless it needs one big boost which the Beastly class specializes in.

Z-Mech has damaging tricks and cards that swarm zombies on the field. Ideally, Stompadon will be able boost many zombies at once. However, Stompadon can only boost zombies in his hand, meaning zombies made by other cards' abilities will remain unaffected by the stat boost. The

Crazy class also lacks in card gain, the best option being Unexpected Gifts, so Stompadon will not benefit much from the Crazy class.

Neptuna is best off not using this zombie, as the Sneaky class is known for reusing the abilities of zombies via Bouncing them or returning them in a Gravestone, which means the stat boost Stompadon gives will be pretty much useless. If she really wants to boost all her zombies' stats, she is better off with Intergalactic Warlord, as his stat boosts will not wear off even when Bounced or returned to a Gravestone.

Overall, Stompadon can be a very effective support card, but its base stats mean it needs support of other cards to make an impact on the field. Rustbolt has the most effective usage out of all the Hearty heroes due to his easy access to Conjuring and natural card draw options.

This can potentially be one of the most dangerous cards of the Hearty class due to its ability activating at least once per turn, and the ability itself is also dangerous. Thankfully, its less-than-average stats for its cost means it is not very difficult to remove it.

Hearty heroes who run Stompadon need a few turns to start making an impact on the field, meaning aggro decks (decks that aim to finish the game as soon as possible) are the best decks to counter Stompadon decks, as they can finish off their opponents before they can play many boosted zombies or engage each of them directly in combat.

If you are not running an aggro deck, the next best thing is to bring cards that can destroy Stompadon before it can activate its ability, such as Health-Nut, Zapricot, Whack-a-Zombie, and Shrinking Violet.

You can also play tempo (make strong plays on the field every turn and keep control of the field) and prevent your opponent from playing Stompadon safely. 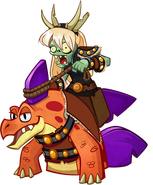 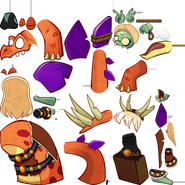 Stompadon attacking from the player's point of view

Stompadon attacking from the opponent's point of view 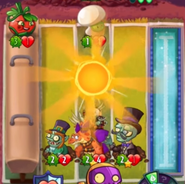 Lawnmower being used on Stompadon 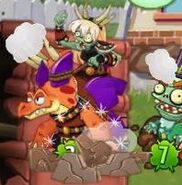 Rock Wall being used on Stompadon

Stompadon being the featured card in the menu for the November 12th, 2017 Daily Challenge