Stinky the Snail is found in all versions of Plants vs. Zombies that have the Zen Garden. He is available for purchase at Crazy Dave's Twiddydinkies for $3000 after the Zen Garden is unlocked. He will slowly collect coins in the main Zen Garden area if he is awake. He stays awake for three minutes, before collapsing in a deep sleep again, requiring manual prodding to reawaken. He has a sweet tooth for chocolate, a substance dropped by various zombies. Feeding Stinky a piece of chocolate will cause him to accelerate considerably and stay awake for an hour. In the iPad and iPhone versions of Plants vs. Zombies, Stinky will continue to collect coins after the Zen Garden is closed after being fed chocolate. In the iOS versions of the game, Stinky will collect money while the player is away, but in other versions, he will not do this.

In the Android phone and tablet version of the game, Stinky can continue collecting coins while the player is doing something other than viewing the Zen Garden. If Stinky is fed chocolate and the game is either exited or minimized, however, the game will forget that Stinky has been fed chocolate. It will also forget that chocolate has been fed if the player does not check on Stinky within the hour time limit of the chocolate's effect.

Even though Plants vs. Zombies 2 has a Zen Garden, Stinky does not return. However, there is another animal instead that functions differently from him known as Bernie the Bee.

The sound that plays when Stinky picks up a coin.

Stinky in the Zen Garden 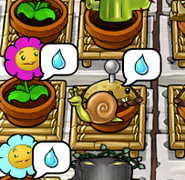 Stinky in the Zen Garden

Stinky in the iPad version

Retrieved from "https://plantsvszombies.fandom.com/wiki/Stinky_the_Snail?oldid=2355537"
Community content is available under CC-BY-SA unless otherwise noted.