None
"I try to warn them, 'This is going to sting.' But the Zombies, they never listen."
Sting Bean is a basic common plant card in Plants vs. Zombies Heroes and a member of the

. She has the Amphibious and

Bullseye traits and does not have any abilities.

She is based on the green bean, also known as the string bean, an unripe fruit and the protective pod of various cultivars of the common bean (Phaseolus vulgaris).

Her name is a portmanteau of "sting," referring to the fact that she attacks zombies, and "string bean," the plant she is based on.

Her original description references the fact that she has the

Bullseye trait, which was originally named

Truestrike, while her new description references her name.

"I try to warn them, 'This is going to sting.' But the Zombies, they never listen."

Sting Bean is no doubt a good early-game plant, and should not be underestimated for both sides. Even though she has low stats (still decent for a 1-sun plant, though), her Amphibious trait grants her safety from most zombies, while her

Bullseye trait allows her to whittle down on your opponent's health reliably. If you give her a boost, Sting Bean can potentially be a big threat to the enemy. While boosting her strength may be hard for some heroes, every

Guardian hero has access to good health-boosting cards like Photosynthesizer and Steel Magnolia, making her harder to destroy. In case of emergency, Bubble Up or Gardening Gloves can move her.

When playing as Grass Knuckles, you can play boosting cards like Fertilize and Plant Food to turn her into a big threat easily. Sting Bean can also be used in a pea deck due to being a pea plant; using her with Torchwood allows her to do 3 damage per attack with

Bullseye as early as turn 2, and with The Podfather, you can increase her base stats to 3

. However, keep in mind that you will not be able to play Sting Bean on the aquatic lane if you use her with the former.

Citron and Beta-Carrotina can use her in a bean deck with Bean Counter and Admiral Navy Bean, where she can be spammed and activate their abilities many times. She can also be boosted by Navy Bean due to her Amphibious trait.

Sting Bean is also a good plant for Evolution. While Puff-Shroom and Lil' Buddy are the cheapest base plants for Evolution, Sting Bean only costs 1 sun and has the Amphibious trait, meaning you can surprise your opponent by playing a powerful Evolution plant like Gatling Pea or Bamboozle on the aquatic lane, and boost it a lot without much interference if their aquatic defenses are poor, both without causing much disruption on your sun management. While she can't be used to Evolve some cards, all their abilities are better off activated outside the rightmost (aquatic) lane. But if you are playing as Citron or Beta-Carrotina, Admiral Navy Bean is a better choice due to its additional Team-Up trait.

It is best to take Sting Bean down before she gets stronger; even if she does not, leaving a plant with

Bullseye alive is not a very good idea. Good, cheap counters to Sting Bean are Rolling Stone, Bungee Plumber, and Nibble. (Nibble cannot destroy Sting Bean, but it does reduce her strength to 0.) But even if you do that, your opponent can play Team-Up or Evolution plants, or reboost her, so do not ignore her lane completely. Later in the game, The Chickening could also be a viable option, as it also damages other plants in the process.

Alternatively, certain zombies like Sumo Wrestler and Snorkel Zombie can help deal with her. 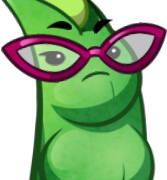 Sting Bean with a star icon on her strength

Sting Bean tinted gray due to a glitch

Gigantic Sting Bean due to a glitch 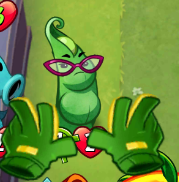 Time to Shine being played on Sting Bean

Sting Bean as the profile picture for a Rank 20 player 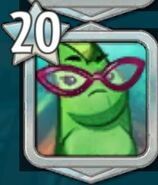 Sting Bean as the profile picture for a Rank 20 player