N/A
Sticky Explody Ball is one of the Scientist's abilities. It is the third ability unlocked for the Scientist in Plants vs. Zombies: Garden Warfare. The player usually spawns with two Sticky Explody Balls ready to use. It is thrown like a grenade, but sticks to whatever it lands on, whether it is a part of the environment or a plant, and even zombies. It deals 50 damage to every nearby plant when it explodes. It can be detonated after receiving a certain amount of damage from the plants. It will detonate instantly when thrown on certain surfaces, such as the Golf Bomb. It takes 30 seconds to recharge one Sticky Explody Ball. Its alternate abilities are Mega Heal Bomb and Sticky Cheetah Ball (Garden Warfare only). After a minute or so, it will explode on its own; this also applies to the Sticky Cheetah Ball.

Using the Sticky Explody Ball on any zombie will make them semi-chomper proof, as long as they have 50 health or less. Also, stick them to plants if you are going to die, as you may get a "Revenge from the Grave!", giving you extra XP/Coins.

The Sticky Explody Ball does exactly what you think it should. But did you know it only explodes in the presence of Plants? Neat!

Description about the Sticky Explody Ball

A Sticky Explody Ball about to explode while on a Cactus 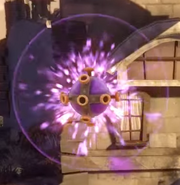 A Sticky Explody Ball about to explode