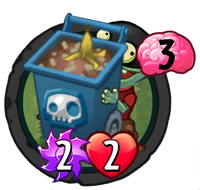 None
Don't look, but there's one behind you right now!
Stealthy Imp is a premium uncommon zombie card in Plants vs. Zombies Heroes and a member of the

Anti-Hero 4 traits and does not have any abilities. Its closest plant counterpart is Poison Ivy.

Its appearance seems to be a masked Swabbie (due to his pirate tribe) holding a modern-looking trash can.

Don't look, but there's one behind you right now!

This zombie can be very dangerous to your opponent for the relatively low cost of 3 brains. It is best played on lanes unoccupied with plants to make use of its

Anti-Hero trait, where it can attack your opponent for 6 damage instead of 2. However, your opponent will not leave it on its own and will attempt to block it if they predict your play, and Stealthy Imp's stats are not good enough to last it through a single turn of combat against most plants. Thus, it may be better to play it a bit later so that you can assist Stealthy Imp with cards such as Backyard Bounce, Smoke Bomb, Terrify, Sumo Wrestler and Pogo Bouncer so that it can attack on an empty lane safely.

As Super Brainz, playing Carried Away on Stealthy Imp and moving it to the right can allow it to do 12 damage to your opponent in one turn, or even 18 if it has already attacked your opponent before Super Brainz blocks and gets the superpower. This serves as a nice early finishing move, and is especially effective against opponents who have not set their defenses well. However, make sure that your opponent's Super-Block Meter has more than 4 empty bars, or else they may block one of the attacks. Also, do not use this combo if Wing-Nut is on the field, because that plant prevents zombies from doing bonus attacks.

Anti-Hero trait will not activate if there is a plant on its lane. Also, since it has the Gravestone trait, you can also make use of Headstone Carver to give it a slight starting boost, which may help it survive certain plants and allow a hit to be landed on the plant hero.

Remember, watch out for anti-gravestone cards because of its Gravestone trait. These include Grave Buster, Blockbuster, Spyris, Cool Bean and Winter Squash, and Grave Mistake.

While Stealthy Imp can hit very hard, this zombie does not pose much of a threat without its

Anti-Hero trait active due to its low base stats, and any plant with 2 or more strength can take it out with no problem. But because of this, your opponent will rarely play it on its own, so expect it to be used in conjunction with support cards like Smoke Bomb and Backyard Bounce. In that case, plants with Team-Up can minimize the harm done by Bouncing cards, while covering as many lanes as possible will lessen the effectiveness of moving this zombie. If you have no option but to leave a lane uncovered, sacrifice the rightmost lane on the field. Also, remove zombies that synergize with it so it can't become too dangerous.

The best counter to this zombie are anti-gravestone cards like Grave Buster and Blockbuster due to its Gravestone trait.