When you play a Root, that Root gets +1

.
Start of turn: Conjure a Root.
His destiny is written in the starch.
Starch-Lord is a galactic rare plant card in Plants vs. Zombies Heroes and a member of the

. He does not have any traits, and his ability Conjures a root card at the start of every turn, starting from the next turn after he is played.

He also gives any fighter card in the root tribe +1

when it is played. This ability stacks with each Starch-Lord on the field and persists until all Starch-Lords are removed from the field.

He is based on a potato, a starchy, tuberous crop from the perennial nightshade Solanum tuberosum, and Star-Lord, a Marvel superhero from the Guardians of the Galaxy series. However, his appearance looks more similar to Jabba the Hutt, a character in the Star Wars franchise.

His name is a portmanteau of "Star-Lord," the fictional character he is based on, and "starch," a common carbohydrate found in staple foods such as corn or potatoes, referring to his appearance.

His destiny is written in the starch.

Despite his poor stats for his cost, this is quite a powerful card, being able to Conjure and boost root plants. Because his ability focuses on roots, you will want to have lots of root plants in your deck. As he can be played from turn 4 onwards, you can almost immediately play the root card he Conjures at the start of next turn, as most roots cost 4

His Conjuring ability is especially powerful, as he could Conjure very strong roots such as Hothead, Soul Patch, Onion Rings, and Tough Beets. Because of this, you should aim to keep him alive as long as possible. Using tricks such as Photosynthesizer or other health-boosting cards or protecting him with Team-Up plants, Force Field, Peel Shield, or Root Wall should help Starch-Lord stay alive for as many turns as possible.

Each hero can use him effectively in their own ways:

And here's the ones Starch-Lord can also Conjure, including everything above.

However, be careful if Quickdraw Con Man is on the field, as every time Starch-Lord Conjures a root card into your hand, it will count as drawing a card, meaning his ability will activate. At the same time, however, since it counts as drawing a card, you can also use him with Dino-Roar cards such as Bananasaurus Rex or Tricarrotops to activate their abilities once more at the start of every turn.

While establishing the fifth turn with Starch-Lord isn't the most harmful play your opponent can make, you should prioritize destroying him as letting him alive will allow your opponent to gain a card advantage and to play root plants that will turn stronger. Fortunately, he can be destroyed easily with cards like Rolling Stone and Cakesplosion, which shouldn't be hard since he is a mid-game fighter.

You can play Quickdraw Con Man to make your opponent think twice before using him. 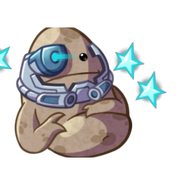 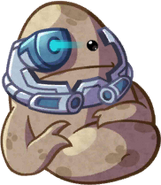 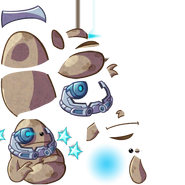 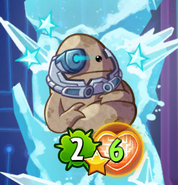 Exploding Fruitcake being played on Starch-Lord

Starch-Lord on the background of the Galactic Gardens battlefield

Starch-Lord being the featured card in the menu for the July 21st, 2017 Daily Challenge