For other uses, see star (disambiguation).

Stars were formerly in the international version of Plants vs. Zombies 2 as well, but they were removed in the 1.7 update. Because of how Plants vs. Zombies 2 used to work, stars were necessary for traveling to other worlds and obtain certain achievements. Star gates were unlocked after beating the final level of a world, then the player needed 15 stars to continue into Pirate Seas and another 15 (or 30 in earlier versions) stars to Wild West. They were replaced by World Keys and completed levels in the 1.7 update.

In the Chinese version of Plants vs. Zombies 2, stars are only used for unlocking certain plants in Plant Exchange, as World Keys are also in this version. However, as of the 1.8.0 update, their original purpose has returned while still keeping the option to unlock plants. 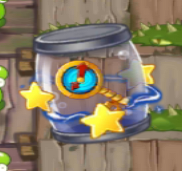 A completed level and an earned star

Attempting to get a star

The player got all three stars

The player got a star