This zombie will squash the first plant it meets.

Squash Zombie is one of the four ZomBotany zombies exclusively found in the mini-game ZomBotany 2, being the zombie-equivalent of Squash. It acts like a Zombie, but it moves at about the same speed of a Ladder Zombie (with his ladder). If it gets within one square of a plant (forward or backwards), the Squash on its head will jump off and destroy that plant in a similar fashion to Gargantuar, while causing its own death as well. Sometimes, its head will jump off as the zombie itself gets killed by plants, which makes the Squash head seemingly disappear. It does not have a Suburban Almanac entry, like all other ZomBotany zombies.

In Plants vs. Zombies: Journey to the West, Squash Zombie will appear as a normal zombie starting in War of the Spider Woman.

This zombie's primary intention is to destroy a plant. Of course, it cannot be distracted by a Garlic so replace it right away. Since it doesn't appear in numbers it's not too hard to deal with it. Do not use Spikeweeds, Spikerocks, or defensive plants because it runs too fast for them to be effective. Use a Puff-shroom to waste its attack if it appears in an empty lane. Alternatively, Hypnotized Zombies can force it to squash, and it will not do anything to that zombie, but this is only extra gravy only for a Tall-nut Zombie.

A burnt Squash Zombie with a burnt Wall-nut Zombie

A Squash Zombie about to kill a Garlic

A Squash Zombie that has lost its arm

Squash Zombie in the seed selection

Unused Ducky Tube Squash Zombie. In Zombotany 2 he will not appear in the water. 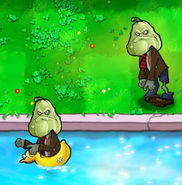 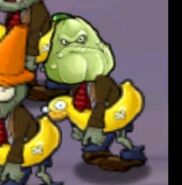