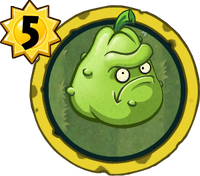 Destroy a Zombie.
Has a bad case of Resting Squash Face.
Squash is a basic common plant trick card in Plants vs. Zombies Heroes and a member of the

to play, and its ability instantly destroys a selected zombie. Its zombie counterpart is Locust Swarm.

It is based on the eponymous plant in PVZ2, while its ability refers to how Squash is functionally an instant-kill plant in many of his appearances.

The term "Resting Squash Face" is a parody of the term "Resting b**** face," a facial expression which unintentionally appears as if a person is angry, annoyed, irritated, or contemptuous, particularly when the individual is relaxed, resting, or not expressing any emotion, referring to his constantly frowning expression.

Has a bad case of Resting Squash Face.

Squash can destroy any zombie regardless of stats and placement, unlike Lawnmower, which is unable to destroy zombies in aquatic lanes or heights, or Whack-a-Zombie, which cannot destroy zombies with 4 strength or more. On top of that, Destroy effects don't trigger "When Hurt" abilities. You can play this on any strong zombie that has high health or strength, such as Zombot 1000, King of the Grill, or Nurse Gargantuar, or early threats such as Jester or Tomb Raiser Zombie. However, since Squash is expensive, you have to make it count; do not waste it on something your plants can easily take care of unless absolutely necessary.

Squash instantly destroys any zombie regardless of stats and placement, so there is no way to nullify or lessen its destruction. You can, however, spread your boosts on all of your zombies to make all of them dangerous, rather than focusing everything on a single zombie and making it extremely threatening so that it becomes a primary target for Squash. However, Wall-Knight can just play Doom-Shroom to wipe out multiple zombies instead, so be cautious when playing against him. If you have to play a zombie that is prone to being destroyed by Squash, then use either Teleport or Teleportation Zombie to play it in the Zombie Tricks phase, or play Defensive End to stall a few more turns. You can give your zombies

Untrickable by playing Parasol Zombie to prevent your opponent from playing Squash on them at all.