None
Up to no gourd!

Squash is a boss in Plants vs. Zombies: Garden Warfare 2 and Plants vs. Zombies: Battle for Neighborville. It appears on the "Stop the Squash" objective in Graveyard Ops. It acts like the plant version of the Zombomb. Once it reaches the Tombstone, it will jump and squash next to it, taking away a chunk of the tombstone's health, depending on the difficulty.

It also appears in the "Protect the Squash" objective in Garden Ops, where the player has to defend it until the end of the wave, resulting in coins earned from Squash when it explodes. In the Backyard Battleground, it appears in the sewers when the player has to find and recruit Toxic Brainz in the said area in the "League of Awesome" Super Duper Brainz mission. It also shows up in Infinity time, after wave 25 while on zombies. If the player gets close to the Squash, it will squash the player, instantly vanquishing them. Its attack is named Squash.

In Battle for Neighborville, it appears as a mini-boss during the story quest "Becoming One With The Dumb." The player must vanquish it before it squashes the stack of Dummies. Its appearance resembles his appearance in Plants vs. Zombies 2.

In Graveyard Ops, Squash attempts to smash up to a quarter of your tombstone health. Like the Zombomb, you must attack it to complete an objective mission. It can knock you back so powerful mid-range and long range fighters are ideal.

In Garden Ops, Squash needs to be protected until the wave ends, it is recommended to follow it for better protection however, snipers could be useful too. 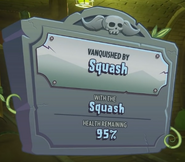 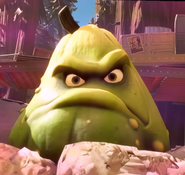 Squash with its spash screen