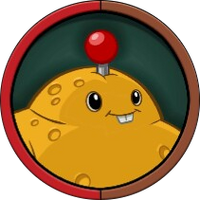 For other uses, see SPUDOW!

Spudow is a plant hero in Plants vs. Zombies Heroes and the leader of the

Guardian classes. His signature superpower is Tater Toss, which makes a Hothead on a selected ground or heights lane, which does 6 damage to a zombie in front of it when it is destroyed.

He is the hero version of Template:PvZHLink.

Spudow is based on the plant from Plants vs. Zombies with a similar appearance. He also bears a resemblance to Baymax from the Disney animated film, Big Hero 6.

His name is a reference to the onomatopoeia "SPUDOW!" that appears when a Potato Mine explodes, or the achievement itself, SPUDOW!.

His description is a gag to how Spudow uses his signature superpower, Tater Toss, in which he loses his head to make a Hothead and respawn his head afterwards. Also, the fact that he can take off his head, throw it and then regrow it may be alluding to Potato Mine and Primal Potato Mine's Plant Food ability in Plants vs. Zombies 2, in which they send out copies of themselves and then regrow in a similar fashion.

His entry animation alludes to the way Potato Mines take time to arm in other games.

One of his Strategy Decks, Bear Necessities, is based on the Jungle Book song, Bare Necessities.

Always tries to keep his head in tough situations. Always loses it.

Spudow can use aggressive Anti-Hero Plants to put the hurt on the enemy, while his explosive direct damage effects knock enemy defenders out of the way.

Spudow can be quite formidable when played properly. The best strategy for Spudow is playing defensively at the start and being on the offensive only at the later stages of the game (Like The Smash). He can use his Guardian plants like Template:PvZHLinks and damaging Kabloom tricks such as Berry Blast to delay the match until he is able to bring out heavy hitters like Dandy Lion King and Soul Patch. Additionally, he has many cards that can boost the strength or health of his plants.

Being a Kabloom and Guardian hero, Spudow has access to

Anti-Hero plants like Poison Oak and Poison Ivy, and

Bullseye plants such as Jugger-Nut. As such, he is meant to hit the zombie hero directly as much as possible, especially during the late game. If there is a zombie blocking a plant, Spudow can use tricks like Gardening Gloves to move the plant out of the way or play damaging tricks to take out the zombie directly.

However, he lacks ways to draw cards, as gardening gloves and petal-morphisis are the only choices and only one is . drawn at a time. Opponents can drain his cards and win from there, so Spudow needs to keep an eye on the cards in his hand.

Like what Dr. Zomboss stated when Spudow is first fought against, you would want to defeat him quickly as he becomes more aggressive as the match progress.

Hearty heroes are ideal to take care of Spudow's defenses since they have access to Rolling Stone and Weed Spray that can take care of bulky Guardian plants with little to no strength easily. If the late game occurs, you might want to prepare tricks such as Rocket Science to dispose of his high strength plants. The best way to take care of him, however, is to bait him into using all of his cards, preferably with a rush deck.

Retrieved from "https://plantsvszombies.fandom.com/wiki/Spudow?oldid=2227565"
Community content is available under CC-BY-SA unless otherwise noted.