Plants vs. Zombies Wiki
Register
Don't have an account?
Sign In
Advertisement
in: Zen Garden, Items, Consumables,
and 10 more

After being placed in the Zen Garden, it will ask to be watered about two to three times, and then it will ask later for fertilizer, and after the player feeds it, a plant will grow and will give the player gold coins (if partially grown) or diamonds (if fully grown).

Marigold Sprout is the first stage of a Marigold. Unlike other Zen Garden plants, they start out as tiny flowers, while other plants are just green shoots. Crazy Dave gives the player two of them, along with the Zen Garden, when they obtain the Watering Can on level 5-4 of Adventure Mode, and they can buy up to three of them at his shop every day for $2500 each. He will restock them daily at midnight. This is a good, cheap way to obtain all Marigold colors.

The Marigolds are much cheaper, as they yield a diamond when fully grown, whereas the plants found in levels yield two diamonds. Once fully grown, they can be sold for $3000, making them an okay way to make money (growing them to full size and sell them to get about a $1200 profit). Unfortunately, it takes time to grow them to full size and the player can only buy three a day. Also, selling other plants yields a much higher profit.

In Plants vs. Zombies 2, sprouts are dropped randomly by zombies or rewarded in Piñatas. When picked up, sprouts will be added to the player's total sprout count. They can drop at virtually any time, and over the course of common gameplay may yield one or two sprouts per non-Endless Zone level. Sprouts no longer appear in Flower Pots, as they only appear in icons, instead a small version of the plant is seen with two phases instead of three phases.

Unlike in the original game, sprouts can be earned at any time, even when the Zen Garden is full. As with all Zen Garden items, zombies can drop sprouts since the 2.1 update.

In the 2.9.1 update, the option to buy sprouts via gems was introduced and the prices are:

A marigold sprout (referred to as sprout in-game)

HD 5 sprouts icon on the store 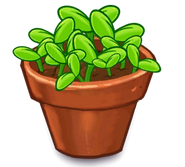 HD 10 sprouts icon on the store 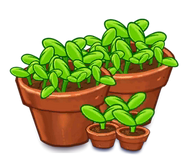 HD 25 sprouts icon on the store

Sprout on the old map 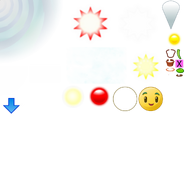 Sprout sprites alongside most of the core sprites 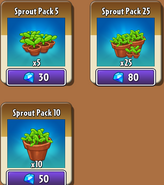 Sprout Packs in the store 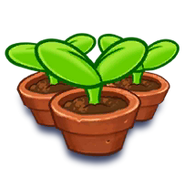 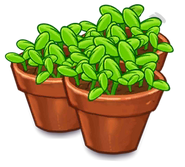