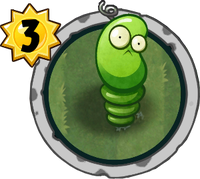 For the version in Plants vs. Zombies 2, see Spring Bean.

Bounce a Zombie.
His favorite season is Fall.

Spring Bean is a premium uncommon plant trick card in Plants vs. Zombies Heroes and a member of the

to play, and his ability gives a selected zombie the Bounce effect. His zombie counterpart is Backyard Bounce.

His favorite season is Fall.

Spring Bean is effective against zombies that have gained strength or health from abilities by any means, resetting their stats and wasting all the turns and cards your opponent used to boost them. You may also pick those that have high base stats to temporarily get rid of them to let your plants attack your opponent. Spring Bean is also a bean card, meaning that he can synergize with Admiral Navy Bean and Bean Counter.

It is highly not recommended to Bounce zombies that can activate their ability when played, such as Disco-Tron 3000, Fireworks Zombie, and Zombot 1000, as your opponent can play them again, re-activating their abilities and causing you more trouble, unless doing so can lead to a win.

You cannot counter this trick, but you can lessen his impact. Do not focus everything on one zombie, as it makes an obvious target. If your opponent chooses to Bounce a naturally powerful zombie, you can play it again with Teleport if you have enough brains. 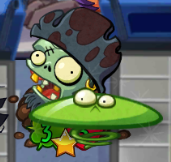 Spring Bean being played
Add a photo to this gallery 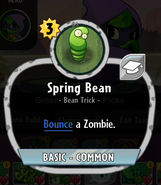 Retrieved from "https://plantsvszombies.fandom.com/wiki/Spring_Bean_(PvZH)?oldid=2248884"
Community content is available under CC-BY-SA unless otherwise noted.