When a Zombie Trick is played, do 2 damage to the Zombie Hero.
"I am Sportacus!"
Sportacus is an event plant card in Plants vs. Zombies Heroes and a member of the

. He doesn't have any traits, and his ability does 2 damage to the zombie hero every time a zombie trick is played. This ability stacks with each Sportacus on the field and persists until all Sportacuses are removed from the field.

He was introduced in the 2017 Valenbrainz event, along with Hot Date and Stupid Cupid. He became craftable as of update 1.12.6.

He is based on a mushroom, the fleshy, spore-bearing fruiting body of a fungus, specifically the panther cap (Amanita pantherina); and a gladiator, an armed combatant who entertained audiences in the Roman Republic and Roman Empire.

His name is a portmanteau of "spore," a reproductive cell or group of cells produced by some plants, and "Spartacus," a Thracian gladiator who was one of the escaped slave leaders in the Third Servile War.

His appearance is based on actor Kirk Douglas' portrayal of Spartacus in the 1960 historical drama film Spartacus directed by Stanley Kubrick. His description is a reference to the iconic "I'm Spartacus" scene from the aforementioned Kubrick film, wherein captured slave revolutionists all claim to be Spartacus as to not reveal the true identity of their leader, knowing that he would be horribly tortured by the Roman empire if found.

Sportacus has the same stats, cost, and class as Vanilla, though he has a good anti-trick ability and is in two other beneficial tribes. He functions like Punish-Shroom, but his ability comes into effect every time your opponent plays a trick. His ability does 2 damage to your opponent for every trick they play, which is great if your opponent focuses on playing tricks. He is also able to pressure your opponent from playing most free superpowers from a Super-Block as they are all tricks.

A clever strategy is to play this in Planet of the Grapes. If your opponent plays a trick, not only will they take damage, but you will also draw a card.

Each hero can use him effectively in their own ways:

You might need to watch out for Squirrel Herder when facing beastly heroes as she can destroy Sportacus instantly. If they notice you with a nut deck and play a gravestone, refrain from playing Sportacus.

Like Black-Eyed Pea, using tricks while Sportacus is on the field is not a very good idea. The best option is to destroy Sportacus at once so he can't activate his ability. Knockout and Zombot's Wrath are some of the best answers to Sportacus as he will not do anything if the trick destroys him first.

If you don't have any tricks that can destroy him, aim on using powerful zombies like Drum Major and Tennis Champ to destroy him instead. Squirrel Herder is very useful, as Sportacus is a nut plant, but watch out for Citron and Beta-Carrotina, who may counter her with Grave Buster and Blockbuster or any other Smarty hero, who can also counter her with Spyris, Cool Bean and Winter Squash or Grave Mistake. Electric Boogaloo is the most efficient at destroying Sportacus out due to his wide range of zombies and tricks to use. Those include Stayin' Alive, Electrobolt, Exploding Fruitcake, Cakesplosion, Zombot's Wrath, Locust Swarm, Alien Ooze, Squirrel Herder, and Abracadaver (assuming it hits his opponent and targets Sportacus with its ability).

You can also play environments such as Black Hole and Total Eclipse to weaken Sportacus' stats without activating his ability, as they are not tricks, although his ability damage will not be decreased. Then, you may destroy him with tricks like rolling stone. 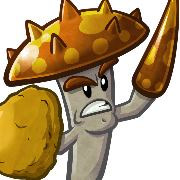 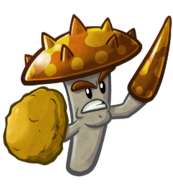 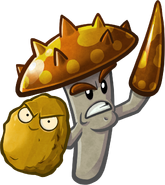 Another HD Sportacus from the Plants vs. Zombies Twitter (note the Wall-Nut's eyes) 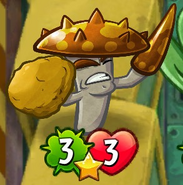 Plant Food being played on Sportacus

Zombot's Wrath being played on Sportacus 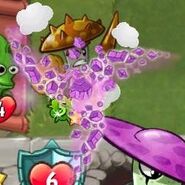 Cut Down to Size being played on Sportacus

Alien Ooze being played on Sportacus

Peel Shield being played on Sportacus

Two Sportacuses on a lane due to Pair Pearadise's ability 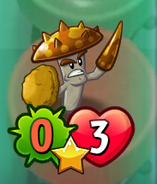 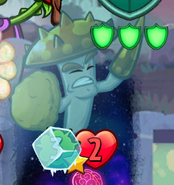 Sportacus tinted gray due to a glitch

Sportacus on the advertisement for the Event Rewind Bundle