For other uses, see Squash (disambiguation)

Spooky Squash is a plant boss in the Boss Hunt gamemode in Plants vs. Zombies: Garden Warfare 2. From October 26, 2016 to October 29, 2016, and later returned on April 27, 2017 to April 30, 2017, August 31, 2017 to September 3, 2017 and November 5, 2019 to November 11, 2019. He is the main boss in the "Tale of The Spooky Squash" Boss Hunt gamemode in the Mystery Portal. Spooky Squash mainly hops around Aqua Center with no destination in mind, attacking any player that comes near with his fire breath and fireballs. He has an obscenely large amount of health, requiring players to complete a set of objectives in order to gain a temporary "Sugar Rush" boost which allows all players to deal large amounts of damage, and then they are actually able to take away substantial amounts of Spooky Squash's health. Completing the Boss Hunt rewards the player 15 Rainbow Stars and one of several special Halloween customization items obtained only by completing this Boss Hunt.

The Spooky Squash returns in Plants vs. Zombies: Battle for Neighborville as a regular boss with its immense health toned down to fit such a role.

Like Sasquatch, Spooky Squash is a tough and very difficult boss unless the entire team knows what to do. Teamwork is key in defeating Spooky Squash. Players should aim to get two scientists and two heavy-hitting zombies as part of their team (Super Brainz, All-Star and possibly Foot Soldier are good choices). Having Toxic Brainz as one of the characters is very useful as his special abilities are useful later on, however, Scientists are the most important class, as you will likely get vanquished multiple times and the Scientists are of utmost importance for healing.

Upon being revealed, Spooky Squash should not be attacked as it would do almost no damage to him. Instead, players should progress through the first phase where the zombies are required to power up two tombstones and keep them powered to anchor the guardian (A Champion Giga Torchwood). Players should have two team members stay behind (either both scientists or one scientist and one heavy-hitter) and keep the two tombstones raised whilst the other two head out to vanquish the guardian (either both heavy-hitters or one scientist and one heavy hitter). Players holding up the tombstone should keep in mind that if they are vanquished or leave the circle, the guardian will disappear and the team has to redo the entire phase so it is wise to put Dr. Heals next to you so you won't get vanquished. He will also summon Chomp Things, Roses, Citrons, Rock Peas, Vampire Flowers and Camo Cacti.

After defeating the guardian, players must locate a candy bucket before defeating a few plant champions to fill it up with candy as part of a curse. It is recommended that a non-scientist character picks up the bucket as not only are scientists unable to use their healing abilities when holding it, but their low health makes them easier to vanquish, therefore restarting the entire phase. Another important point is that players without the bucket should not pick up/eat the candy as the message 'The candy was too sour' will show up, the player that ate it will be vanquished immediately, and the team will have to find the next champion, thus wasting time. If the time runs out, the bucket's bond will break, triggering the curse "All Hallows Eve", vanquishing the team and potentially costing them the game.

After collecting the required amount of candy from vanquished champions, players receive a "Sugar Rush" boost which buffs their damage by around 50 times. In this state, all players should locate the Spooky Squash and inflict as much damage as they can onto it before the boost ends. However it is hard as Spooky Squash has no critical hitbox. After this, the entire cycle must be repeated until Spooky Squash is vanquished. However, if the Spooky Squash's health is low enough(To the point it is just barely visible on the health bar) and your team feel confident that you can defeat the Spooky Squash, continue attacking him though one must approach the boss less recklessly for a successful non Sugar Rush boosted attack. 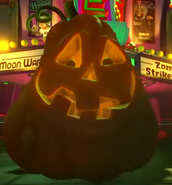 Spooky Squash in the loading screen, along with two Weeds, Rose and Vampire Flower 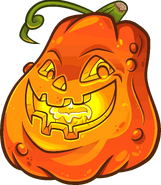