Before combat here: This does 1 damage to the Plant Hero.
"All I wanted in life was to get ahead. But it kinda grew on me. How to face the future? I'm of two minds."
Split Pea is a colossal super-rare plant card in Plants vs. Zombies Heroes and a member of the

It does not have any traits, and its ability does 1 damage to the plant hero before initial combat. This ability stacks with each Split Pea on the field and persists until all Split Peas are removed from the field.

The Split Pea is based on the eponymous plant in Plants vs. Zombies.

"All I wanted in life was to get ahead. But it kinda grew on me. How to face the future? I'm of two minds."

Split Pea is slightly similar to Wild Berry, a glass cannon for a very low cost of 2

but also with a drawback. For Split Pea, the drawback is that it do 1 damage to you before combat. Of course, this only applies during the fight phrase and all Mega-Grow heroes have access to bonus attack cards, so this should not be a very big problem if one can manage their health.

Split Pea can work wonders in most situations as a low-cost card with surprisingly high damage to either get the early advantage at the start of a match, or to provide ample strength for minimal cost later in the game. Additionally, the damage dealt to yourself does charge your Super-Block Meter so if your strategy requires some clever manipulation of it, then this is worth using.

If your health is very low, do not use this plant, especially when you have only 1 health; unless you can win the game with that there is no reason in deploying it. Since the ability activates before combat, the zombie hero will win the game easily due to this.

Since it is a pea plant, it can be paired with Torchwood to increase its strength by 2, or get boosted by The Podfather's ability. Also, the value of self-damage is static in all cases, and will remain at 1.

To prevent the 1 damage from happening to you, you can play a Body-Gourd to instantly fill your Super-Block Meter to full so that you can instantly block the 1 damage, but this should only be used if you will be taken out by Split Pea, since Body-Gourd is better used elsewhere. Soul Patch can also absorb its ability, thus not taking any damage due to his Armored 1 trait. Only Grass Knuckles can do either of this normally.

Split Pea is a very powerful plant in the early stages of a match and should be disposed of as soon as possible. Fortunately, its low health makes it susceptible to many cheap tricks such as Bungee Plumber and Nibble, as well as zombie abilities from Pied Piper and Conga Zombie.

If your opponent is at 1 health and has less than 5 charges in their Super-Block Meter, it is not recommended to destroy this plant, as it can easily defeat your opponent with its ability. 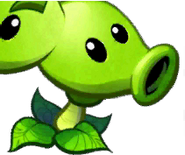 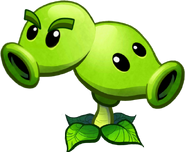 Time to Shine being used on Split Pea 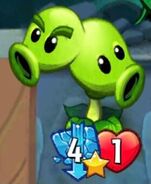 Embiggen being used on Split Pea