Not to be confused with Spinnapple, a plant in the Chinese version of Plants vs. Zombies 2.

When played: Plants with no Strength get +2

.
Don't let his gruff exterior fool you. He's always looking out for the little guy.
Spineapple is a basic common plant card in Plants vs. Zombies Heroes and a member of the

He does not have any traits, and his ability gives all plants with no strength on the field, including him, +2

He is based on the pineapple (Ananas comosus), a tropical plant with edible multiple fruit.

His name is a portmanteau of "spine," referring to the spikes he has, and "pineapple," the real-life plant he is based on.

His description references his ability, as he is said to be "looking out for the little guy," i.e. the weak plant with no strength.

Don't let his gruff exterior fool you. He's always looking out for the little guy.

Spineapple goes well with any plant with no strength like Torchwood or Sweet Potato to put a little more hurt in your opponent's side. Wall-Nut or Water Chestnut synergize especially well with him due to their Team-Up trait, high health, and low cost, as well as Hibernating Beary, who will pressure your opponent into dealing with it as it doesn't leave them alone, even if it hasn't been hurt. This plant can also restore strength that other plants have lost from cards like Nibble, Stupid Cupid, Landscaper, Pied Piper, and Shrink Ray.

However, keep in mind that if you want to use this card alongside other stat-boosting cards such as Berry Angry or Storm Front, it is neccesary to play this card first as playing said cards first instead will put all plants out of Spineapple's boosting range, ultimately losing out on +2 strength for every 0-strength plant.

Also, you still need to be careful against

Hearty heroes because Weed Spray and Rolling Stone can still destroy plants with Spineapple's strength boost, so you must play Spineapple carefully if your opponent saves 3 brains or more. However, Spudow can use Berry Angry or Storm Front to boost the plants' strength even further, rendering them invulnerable to said zombie tricks. While Grass Knuckles can also boost plants further with cards such as Fertilize, it may take more time than Spudow to make a formidable defense due to those cards usually only boosting one plant at a time.

Unfortunately, Spineapple faces competition against Three-Nut and Loco Coco. Three Nut will forcibly change the strength stat of any other played plant into 3 regardless of their base strength, while Loco Coco has good tribe synergy and provides a better boost to plants with no strength, on top of creating 0-strength plants if you lack them.

But Spineapple has the advantage of his ability taking place immediatly and to all plants on the field, so with the proper setup it may be better than Three-Nut. As for Loco Coco, he costs twice as much and requires a nut to activate his Evolution ability, and is equally vulnerble if confronted by certain combos. Thus, Spineapple can still find a spot in many Guardian decks.

For an easy reference, here is a list of plants that can benefit from his ability:

Smarty (Beta-Carrotina and Citron only)

If there are a lot of plants with no strength on the field, Spineapple can cause a lot of mayhem. The best method of disposing of these plants is Weed Spray, as long as the plants are not boosted in any way. This is especially helpful for destroying plants with high health like Wall-Nut.

However, if there are not that many plants on the field, using Rolling Stone can also work. Additionally, using stat-decreasing tricks like Nibble can help ease the situation. 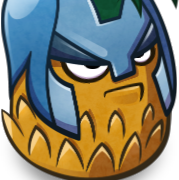 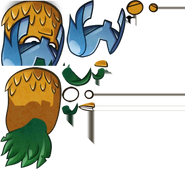 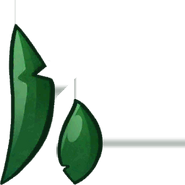 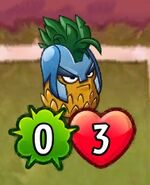 Rolling Stone being played on Spineapple 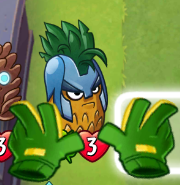 Gardening Gloves being played on Spineapple 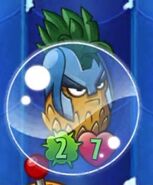 Bubble Up being played on Spineapple 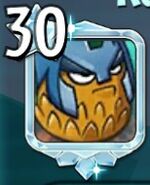 Spineapple as the profile picture for a Rank 30 player 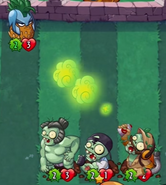 Landscaper activating his ability on Spineapple

Spineapple as the profile picture for a Rank 30 player