40 sec.
Charge, then launch yourself at your enemies to inflict big damage!

13 sec.
Ball dash forward to hurt enemies and knock them back.
Spin Dash is an ability for Citron in Plants vs. Zombies: Garden Warfare 2 and Plants vs. Zombies: Battle for Neighborville. In Garden Warfare 2 it is exclusive to Citron in his Citron Ball. When used, he will spin himself in place for a few seconds before charging at full speed, knocking away anything that he collides into.

It works similarly to the All-Star's Sprint Tackle, however, Spin Dash takes around two seconds to charge before launching Citron forward, while the Sprint Tackle launches the All-Star forward immediately.

Its name and ability are based off from Sonic the Hedgehog’s iconic move, the Spin Dash.

Charge, then launch yourself at your enemies to inflict big damage!

Ball dash forward to hurt enemies and knock them back.

The Spin Dash is most effective when used to surprise an unsuspecting opponent. It is unlikely this attack will vanquish the target, so quickly switch from your ball to Assault Form and finish your opponent off with the Citron's primary weapon. This ability can also be used as an escape mechanism from a dangerous situation.

If you see a Citron charging his Spin Dash, move out of the way. It is incredibly dangerous to all Zombie classes, especially fragile characters like Imps and Scientists, as it deals a good amount of damage and knocks you back. Using quick escape options like the Rocket Leap and the Heroic Kick can prevent you from being hit by the Spin Dash. 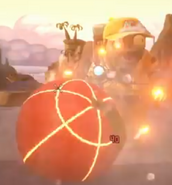 Spin Dash about to hit an Imp