For the version in other games, see Spikeweed.

N/A
Laying Spikeweed traps is a great way to ambush Zombies. If they walk over the Spikeweed, they get ensnared and are easy to chomp.

N/A
Laying Spikeweed traps is a great way to ambush Zombies. If they walk over the Spikeweed, they get ensnared and are easy to chomp.

It takes 60 seconds to recharge one Spikeweed. In Garden Warfare 2, swallowing an ensnared zombie player reduces the cooldown by 60 seconds. The player can have three of them to plant before recharging and four to place max. The alternate abilities of this ability are Spiky Spikeweed and Chesterweed (the latter only being available in Garden Warfare), as well as Vampweed (Garden Warfare 2 only).

In Battle for Neighborville, the ability has been reworked so the Chomper will now fire Spikeweeds as a projectile instead of placing it down directly below its position; like its counterpart in Garden Warfare and Garden Warfare 2, it deals 25 damage twice for a total of 50 damage.

Laying Spikeweed traps is a great way to ambush Zombies. If they walk over the Spikeweed, they get ensnared and are easy to chomp.

As its Stickerbook description suggests, you can use Spikeweeds to trap enemy zombies. It is best to place Spikeweeds in areas where zombies cannot easily see them, making it easier to get trapped. If a zombie is trapped in a Spikeweed, the player can easily chomp and swallow the enemy zombie, as they are unable to do anything while ensnared, in Garden Warfare, there is even an achievement for doing this to ten zombies in a single game session.

If the player is playing Gardens & Graveyards, you can place Spikeweeds around the garden, being able to easily stun zombies as they try to capture the garden so you can finish the rest.

In Battle for Neighborville, Spikeweeds give you health when destroyed (even without the "Vampweed" upgrade), so it might be a good idea to spam it around obvious and out-of-place locations to heal extra health. Do note that it will not heal you if you're in Burrow, however.

A view of Spikeweed, revealing its eyes 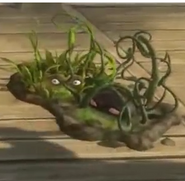 In-game Spikeweed, next to Spiky Spikeweed

Getting 25 coins from a Spikeweed Assist

A Scientist trapped by a Spikeweed, hanging upside-down