For other uses, see Spikerock (disambiguation).

Spikerocks pop multiple tires and hurt any zombies that step on them.

Can't be eaten by zombies

40 damage per shot every 1 second

After Level 5-1, $7500
Spikerock just got back from a trip to Europe. He had a great time, met some wonderful people, really broadened his horizons. He never knew they made museums so big, or put so many paintings in them. That was a big surprise for him.
Spikerock is a plant in Plants vs. Zombies. He does double the damage of a normal Spikeweed and can be punctured/smashed up to nine times. He is a passive attacking plant, dealing high damage to any zombie that walks on him.

He usually deals five attacks to every normal speed zombie that passes unimpeded over him (exceptions include zombies that come in a group, when one zombie gets on just after the Spikerock fires). Since the Spikerock attacks from below, he bypasses shields.

Spikerocks will pop tires, up to a different number of vehicles before dying in different games, with one of his large spikes breaking off with every one-third of health. When a Gargantuar attacks him, he will have the same effect as when vehicles roll over him, hurting the Gargantuar.

Spikerock is the upgrade of Spikeweed, and is purchased from Crazy Dave's Twiddydinkies for $7500. He costs 125 sun to upgrade a Spikeweed to a Spikerock, for a total cost of 225 sun. Spikerock absorbs nine smashes and his appearance changes at the third and sixth smash before finally being dead at the ninth. He loses one of his large spikes when smashed three times. He will damage zombies at ten health of damage per a regular zombie's patch speed. He will automatically kill Zombonis and Catapult Zombies by popping their tires.

Using slowing plants like Snow Pea or Winter Melon can provide a great damage increase to ones Spikerocks, because zombies will be walking over them for twice the amount of time. Kernel-pult can also be a good option because of his stun.

Spikerock is uniquely capable of withstanding multiple strikes from Gargantuars. This considerably slows Gargantuars and allows extra time for your other defenses to attack, since, unlike other zombies, Gargantuars will stop to destroy Spikerocks.

As he can pop multiple tires, Spikerock is an incredibly useful plant to use in the mini-game Bobsled Bonanza. It is a good idea to plant a column of Spikeweeds at the edge of the ice to deal with Zombonis, but they should be upgraded to Spikerocks as soon as possible. To deal with the Zombie Bobsled Teams, there should be an additional Spikeweed behind the Spikerock (as the zombies can only take one normal damage shot after passing over the Spikerock, although when first setting up it is best to plant three).

Though useful on the early waves, Spikerock is not recommended for Survival: Endless due to overlapping Zombonis, Catapult Zombies, and assorted Gargantuars. Often, a Spikerock may be killed shortly after he was placed down. However, Spikerock is ideal for any normal Survival Mode level, easy or hard. The ability to kill multiple Zombonis, that if left alone, will crush your setup, is a superb one by any fact. He can also save your offensive plants some time, as one Spikerock can kill a Basic Zombie without help. Many strategies use Spikerocks planted on the back most column in Survival: Endless to kill Digger Zombies.

Spikerock seed packet in the iOS and Android versions

Spike from the plant

Spikerock in a Pumpkin

Spikerock in an Imitater Pumpkin 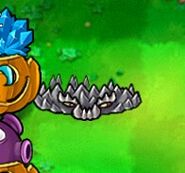 Glitched Spikerock with no spikes